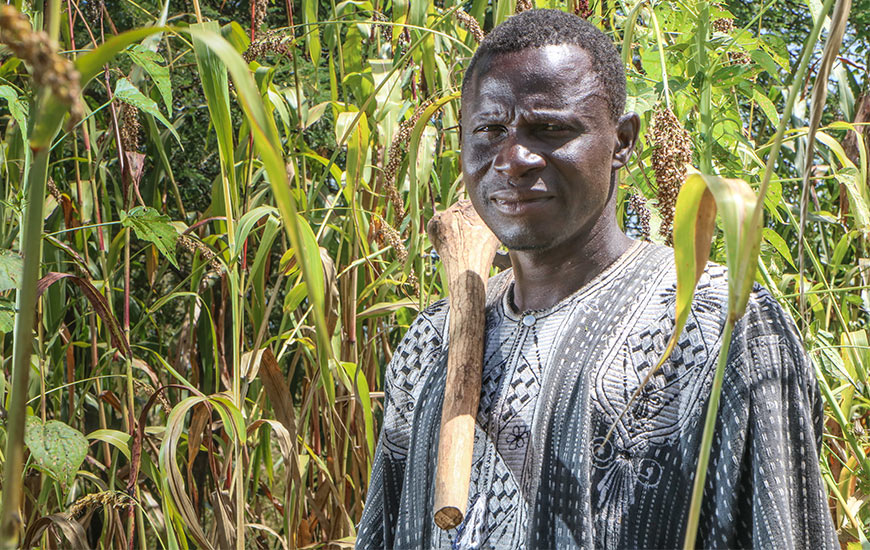 “The weather here is changing. Rain is becoming more scarce. Over the last five years, I’ve noticed that the rain tends to come very late into the rainy season,” explains François Tarpaga as he stands in the middle of his rice field in Ratenga village, in the centre-east region of Burkina Faso.

The 49-year old father isn’t the only farmer in the area who is struggling to cope with the changing climate. One of the hottest places on Earth, Burkina Faso is particularly vulnerable to the impact of climate change, with much of the country’s population suffering from increasing drought spells and food shortages.

But François – who grows the country’s staple rice crop as well as millet, beans, peanuts, sesame and maize – is learning new ways to cope with the unpredictability of the weather. As part of a Gorta-Self Help Africa project in his area, François received drought-tolerant seeds and was trained on climate-smart farming practices, such as the use of compost holes to increase the fertility of his soil. These fertile depressions in the ground also form a ‘bowl’ that holds the water beside each plant, when it does rain.

“The training I’ve received has been useful to help me cope with the changing weather. The seeds I’ve received grow much more quickly than the ones I used before, as a result my production has increased.”

François also learned about the benefits of savings, so he can manage his income to become more resistant to future shocks or crises.

Sole provider for 11 dependents, François didn’t get the opportunity to go to school and so didn’t get many career options outside of farming. However, he takes great pride in farming which he sees as a way to “help people get more food”.

His own children will have the choices in life that Francois never did, as they are all attending secondary school.