Self Help Africa has been implementing agriculture and rural development projects in Uganda for close to 20 years. 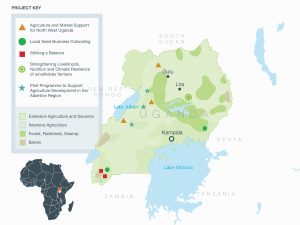 These diverse partners all have huge potential in addressing the country’s hunger and poverty. We believe that the most effective role that we can play is in facilitating partnerships that will bring them together to serve the needs of underdeveloped rural communities.

We aim to be a catalyst, developing collaborative approaches to meet specific local needs through effective, integrated and sustainable solutions.

In this way, initiatives can continue without our support and have the potential to grow. Our programmes link with the national agricultural strategies produced under the Ministry of Agriculture, Animal Industry and Fisheries (MAAIF) Development Strategy and Investment Plan. 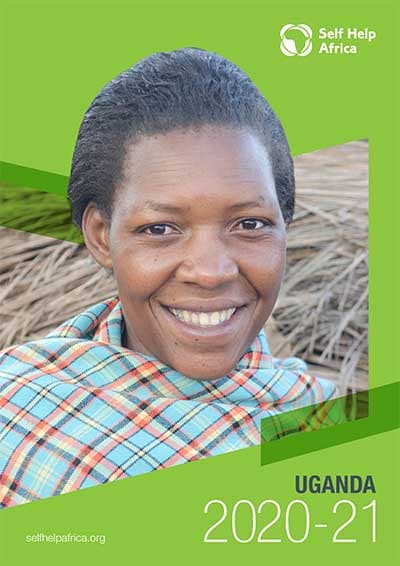 Lake Bunyonyi is a high-value natural resource for the predominantly rural populations of Kabale and Rubanda districts. The lake is also an area of outstanding natural beauty and biodiversity, with significant potential to generate tourism revenue for the communities living around it. Poverty and mounting population pressures have caused significant degradation of natural resources in the lake basin, resulting in declining water availability, loss of wildlife habitats and soil fertility, and posing a long-term threat to the income and food security of poor rural households.

The MORE: Markets Sustainable Livelihoods and Inclusive Markets for Refugees project aims to improve the food, nutrition and income security of refugees and host communities in Adjumani, creating a pathway to self-sufficiency through the development of resilient livelihoods.

The project will organise 1,000 project participants into 40 farmers’ groups, including 15% youth, 60% women and 5% people with disabilities. Groups will receive training on Good Agricultural Practices (GAP) for the production of bio-fortified foods, and on post-harvest value addition, nutrition awareness and food preparation.

It will increase production and sales of maize, beans and sorghum for 5,000 smallholder farmer households in Kiryandongo and Adjumani Districts.

Programme to support agriculture development in the Albertine region

Following the end of the pilot phase in July 2019, SHA submitted a proposal for a twelve-month costextension to the original contract. The start-up to the proposed extension was delayed by the restrictions introduced by government in response to Covid 19 pandemic.

When the pandemic was relaxed in June 2020, SHA agreed to reduce the timeframe to six months and consequently some activities and budget was removed from the agreed six month extension. The proposed extension will consolidate the achievements of the design pilot phase in order to deepen the benefits and make them more sustainable.

The overall objective of this project is to create resilient, self-sustaining farming communities where poverty
and hunger are reduced. This is being achieved through strengthening the livelihoods, nutrition and climate resilience of smallholder farmers in four districts of Teso, North Eastern Uganda.

This project is being implemented through two communitybased organisations and three local NGOs, in order to increase engagement and ownership of the project, as well as building capacity at the local level.

From 2003-2008 Lord’s Resistance Army insurgencies and armed cattle rustling in Teso, Northern Uganda, resulted in a breakdown of infrastructure, loss of services, livelihoods and skills, with 80,000 people moving to Internally Displaced Persons camps, and many remaining there for over a decade. The communities in this area remain very poor and vulnerable to shocks, so this project aims to provide training in relevant agricultural practices to enable these communities to increase their production, diversify their diets, and raise their income levels.

Self Help Africa will deliver training to farmers organised into 19 youth groups, 19 women’s groups and 2 groups of people living with disabilities. Secondary beneficiaries will be a further 5,000 people of all ages in targeted households. By the end of the two year project it is expected that annual disposable household income for these households will increase from the current deficit of UGX -40,000 to UGX 101,000 shillings; 850 households to have increased production of crops and livestock; improved dietary diversity among 750 households; and increased decision-making power of women and young people.

In Uganda, approximately 1.5 million households derive income from beekeeping, harvesting various products including honey, propolis and beeswax. This project aims to transform the lives and increase incomes for 2,000 smallholder farmers who will benefit from improved skills and access to reliable markets offering competitive prices for their produce.

The project will support GBL and Swienty Commodities’ commercial objectives of increasing the quantity, quality and traceability of honey and wax sourced from Uganda.

COMMUNITY EMPOWERMENT THROUGH DIGITALISATION IN THE TESO REGION

The overarching objective is to identify user preferences and knowledge gaps and to detect barriers and untapped opportunities for effective and inclusive adoption and use of information and communication technology and how these could impact on livelihoods, food consumption, and resilience to market, health and climatic shocks.

SEED: MARKET-DRIVEN SCALING UP AND ADOPTION OF POTATO IN AFRICA

As part of the wider programme across two countries, SHA will be working with potato farmers in SouthWest Uganda to accelerate the large-scale access to and adoption of climate-smart and market-demanded novel varieties of potato.

Identifying varieties suitable for African conditions has been supported by the Syngenta Foundation for Sustainable Agriculture (SFSA) and USAID, with an explicit focus on climate resilience and disease resistance.

These varieties carry more robust, market-demanded traits than those currently grown, striking a balance in addressing farmers’ limited ability to purchase inputs and meeting diverse market demands. Overall, this innovation will accelerate the delivery of newer potato genetics to farmers, and therefore would increase the actual adoption of novel varieties among smallholders producing potatoes for income generation and food security.