2008 winner of the Science for Development Award 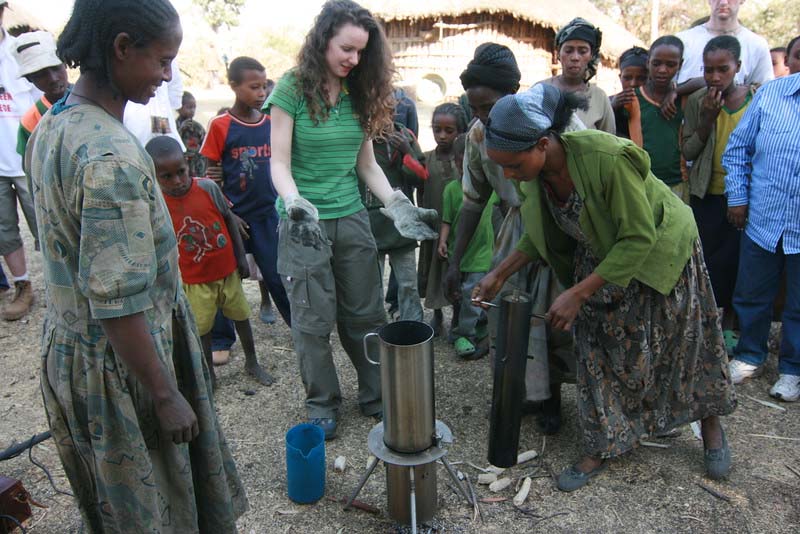 ...so many careers just didn’t exist that people are doing now. There are so many things that they could do, so try lots of them... And you can always change your mind!

You won the ‘Science for Development’ award when you were in 6th year, but when did your Young Scientist journey begin?
I was a Young Scientist-obsessive student! I went first when I was in 2nd Year, mostly because I thought my science teacher was the coolest person in the whole world, he was young and would let us watch Star Trek on a Friday. I did the Young Scientist again in 3rd Year, and in Transition Year my group won the prize for runner up in our category for a game based on a theory of inventive thinking called TRIZ that had been developed by Genrich Altshuller. That project was related to the project I won the ‘Science for Development’ award with in 6th Year, and even formed the basis of my career.

After the success of placing 2nd in your category in Transition Year, did you enter the competition again in 5th year?
In 5th year I applied with a project which was a video game version of what I had done the year before, but I didn’t get in. I built it with a friend I had met at the Young Scientist who went to a different school who now owns a gaming company. He became really helpful when I worked for Raspberry Pi and CoderDojo - I didn’t realise I had been networking as a 15 year old at the Young Scientist!

How did the TRIZ method lead you to develop a pressure stove as a project in 6th Year?
For me, projects were about the method of solving problems, rather than an interest in the subject matter. Genrich Altshuller was a patents officer who basically found out that every invention had common inventive principles, and that you could solve anything by going through these 40 steps in a matrix. Using TRIZ, I was coming up with things like how to tie your shoelaces better, or designing a new type of bra - anything that was presented to me, I wanted to apply my method. When my aunt returned from a trip to South Africa, I learned from her that a huge problem there was indoor air pollution. It annoyed me that women had to do all the cooking and suffer from the pollution, so I went about solving that using the TRIZ 40 principles. How do you cook something really quickly with very little water, and the water must go past the boiling point so that it kills all the bacteria? One of the steps is to combine it with something else, another is to use something that’s been done before... All of the principles came together to form a way of cooking with a pressure stove.

Your travel award bursary brought you to Ethiopia, and RTÉ filmed the documentary ‘My Big Idea’ while you were there. How was that experience?
When we went to Ethiopia to test the stove, it was amazing. The local women and whole camera crew were crying thinking it was brilliant… and then the women told us that they eat injera, a type of flatbread, which couldn’t be cooked on my stove because it was flat. There are different ways to look at the journey of what I did. There are people who say that it was a good idea, but it didn’t work in Ethiopia, therefore it wasn’t successful. But to me, I learned a big lesson about design that influenced my career - you’ve got to ask the people you’re designing for. My job now is Head of Product Innovation at Novarits, a role which is about enabling people to be more innovative. 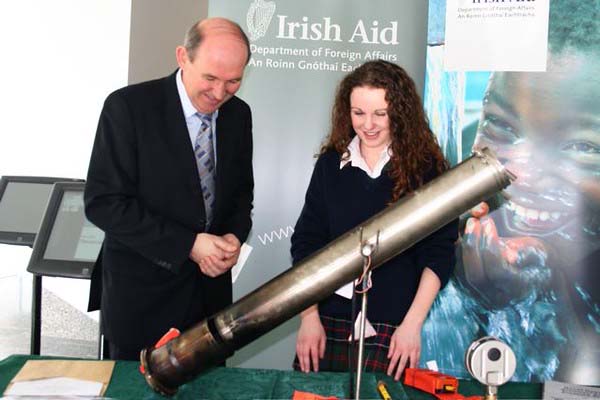 Did your experience in Ethiopia have any other impact on you?
I changed my CAO form after the trip. I had applied for Industrial Design in NCAD, a course which I had been accepted for based on my portfolio, and had to take up Applied Maths towards the end of 6th Year to meet the criteria because I hadn’t taken a science subject for my Leaving Cert. But after the visit I decided to switch to International Development in UCC. The NCAD course would have given me the design basis to do whatever I wanted, including working in development, and while that course could have led me to the same role that I am in now, I do not think I would be as good at my job. I got promoted within a year at this company, I think because of the experience in not-for-profit and working overseas.

You’ve been involved with Self Help Africa again in a couple of ways since your trip.
The year after I won, I went to the Young Scientist with Self Help Africa to help out at their exhibition stand. A student in his uniform approached me, who had heard about my pressure stove, to tell me about his own idea for a stove and sketched it out for me. And the following year Richie O’Shea was on the stage getting his awards for that project. That was pretty cool. 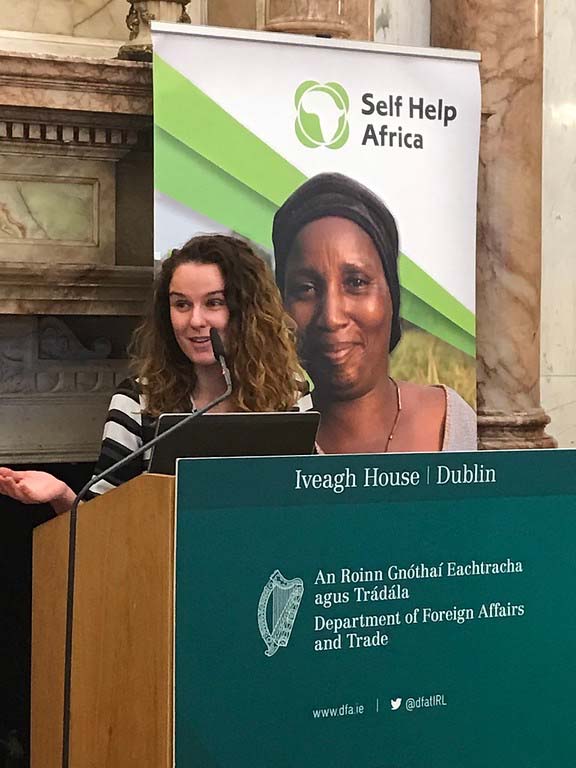 I later did an internship with Self Help Africa and while I was there, I had the opportunity to pitch an idea for what’s called participatory video at a country directors meeting. I travelled to Zambia and Ethiopia for “The voice of the Farmer” pilot project. It empowers people to create educational videos for their communities, but they decide what their issues are and what they want to talk about in their video. A group in Zambia made a video about goats, a group in Ethiopia about young girls having open communication with other women in their community, there was another video about beekeeping… the issues ranged hugely. I still get emails from one of the partner organisations, to tell me that they still have the cameras and they’re still making videos. It has to come from the communities themselves to make a change.

In the range of roles and projects you’ve worked in, you have very much filled the role of a facilitator. Is this deliberate?
I don’t think I’m the most intelligent, creative, or inventive person in the world, but I know I’m really good at supporting other people to do it. If I had spent three weeks with those women in Ethiopia, we would have created something that they had designed for themselves and could adapt easily. I don’t want to be creating products for other people, I want to bring groups of people together to make really cool s&!%!

I’ve always felt that supporting people to do that work in their own country and overcome their own challenges is much more beneficial than coming in for a month with an intervention, then leaving.

How have you been able to connect your range of work in not-for-profits with your current role at a pharmaceutical company?
I really loved the work in not-for-profits, I want other people to experience that empathy is really important and nothing is ever going to change without it. I have found that there is so much opportunity with foundations - the Novartis foundation have an incredible malaria programme, Raspberry Pi foundation enabled me to set up CoderDojos. I have been able to link not-for-profits I know to have conversations with the foundation that can increase their funding. There are different ways of being able to do what I really care about.

What advice would you give to recent Science for Development winners Sophie and Salome, who will be sitting their Leaving Certificate exams this year - about choosing their careers?
When I was their age, so many careers just didn’t exist that people are doing now. Be open and try everything, get involved with stuff that is outside of your comfort zone. When you are a really high achiever in school, and obviously they are, you can end up setting very high standards for yourself that can be really unfair, so fail a bit and make some mistakes. They’re obviously educators, they’re inventors, they’re designers, they have a huge level of empathy, they’re community advocates, they’re women’s advocates. There are so many things that they could do, so try lots of them... And you can always change your mind! 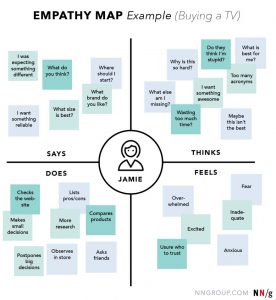 Example of an Empathy Map

What about advice for a younger student thinking of entering the BT with a project connected to Science for Development?
Try to find people you can talk to who have that experience, look for the testimonies of people who are your users, it could be a video, or Netflix documentary. There’s a great technique students could use, my favourite method, called an empathy map. If you want somebody to actually use what you’ve created, you’ve got to think about what they’re thinking, what they’re feeling, what they’re doing and what they’re saying. An empathy map will change how you approach your idea.