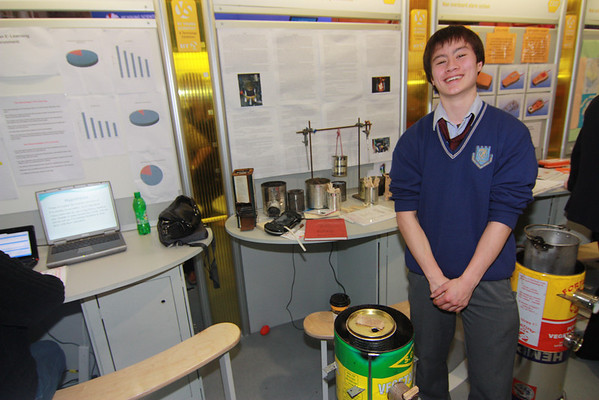 “...if a secondary school student comes to me looking for advice, I’ll give them the time because I was given the time. We owe it to society to encourage young people with ideas because they are going to be the people driving this change.”

Richie won the ‘Science for Development’ award and was the overall winner of the Young Scientist Competition in 2010 while a 6th Year student at Scoil Mhuire gan Smál, Blarney, Co. Cork. Richie is now a postdoctoral lecturer at University College Cork.

How did you get started on researching your project, and how did you develop your initial experiments?
I was in the scouts for years and always enjoyed lighting camp fires, but I really did not like getting smoke in my face! I started trying out some basic stove designs from scouting handbooks and went from there, constantly trying to make it a little more efficient.

I eventually came across a concept called ‘gasification’, which is a way to power cars using solid fuel like wood or coal - they used this process a lot during WW2 when there was a shortage of oil. I wondered if I could apply that concept to a cooking stove. So I reverse engineered a commercial stove and figured out how to make one with upcycled material and put controls onto it to modulate air flow and shield it from the wind.

How did you decide this type of stove could be designed for the needs of people in developing countries?
The idea of using the stoves in developing countries probably was in the back of my mind, from the influence of my parents to a degree. My parents were both missionaries - my dad in Kenya and my mum in Nigeria - so I was aware of the broader context from hearing stories about the work that they did on their travels. 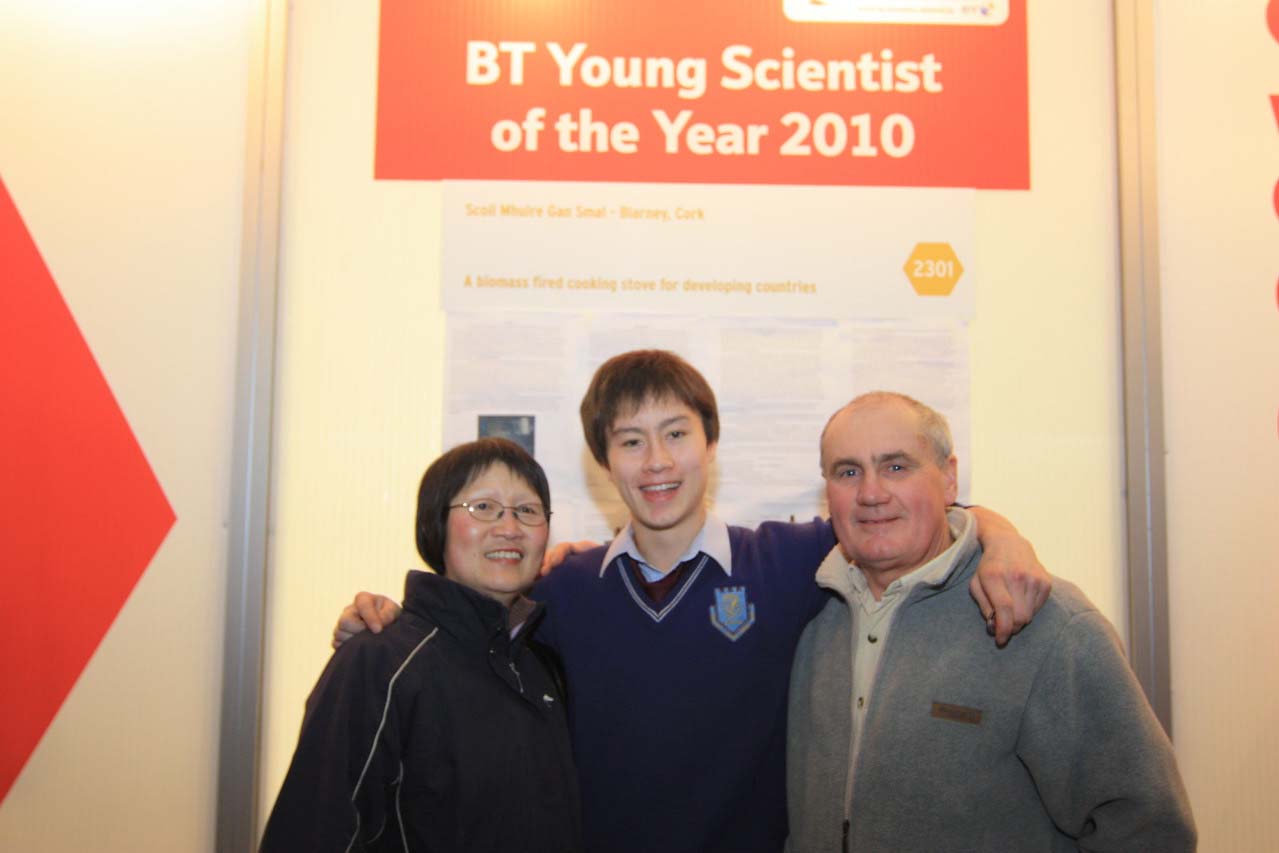 At the urging of my teacher Mr. Seán Foley I carried out research and found out about the issues of access to clean cooking and low emission fuels, and the implications that using inefficient cooking methods had on deforestation, desertification and human health - specifically on inhaling particulate matter. Women suffer the worst effects because they are inside cooking on these fires, and children also suffer from being exposed to carbon monoxide from a young age. At that time, a significant population of the world still cooked their food using three-stone open fires.

What resources or knowledge did you need to build and test your stoves?
A lot of my stoves were built with a swiss army knife and screwdriver, punching holes into tin cans. Testing the efficiency of the system was equivalent to Leaving Cert Physics - you measure the mass of a can of water, measure the temperature  rise, measure the mass of the fuel burned… I started with a very simple system and tried to improve upon it sequentially, taking inspiration from other types of stoves. I can’t remember how many types of stove I tested but I distinctly remember my garage being full of them!

Were there any people who gave assistance to you during your project?
I wanted to use a constant source of timber to cut out variables - my dad sourced this for me from someone who made pallets, so I had a pile of timber of the exact same type that I used for fuel. Very fortunately I got some help from a friend who installs and services gas boilers, who kindly measured the emissions of a couple of the stoves I had built.

I was also very grateful to get help from the Chemistry department at UCC through Mr. Foley’s contacts. had contacts there, through them I very kindly got access to a bomb calorimeter to find the calorific value of the timber. To calculate the efficiency of the stoves, you need to know the energy content of the fuel you burn, and they assisted me in testing samples of the timber I was using. 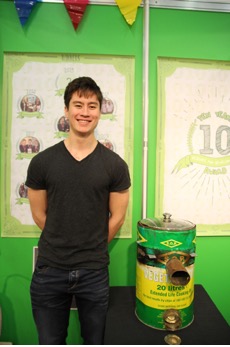 While the majority of the work was done in a garage with a pen knife, it was useful to have some contacts at third level who can apply a more rigorous scientific approach to certain aspects of a project. It was hugely beneficial for me to get this assistance. Although I suppose now you could probably buy a bomb calorimeter on Amazon...

Were you surprised to win both the ‘Science for Development’ award, AND the overall Young Scientist competition in 2010 with this project?
Yes, I was surprised. I didn’t think that I was going to win anything to be totally honest! I had entered the Young Scientist competition every year since I was in 2nd year, and I really enjoyed taking part in it and having the opportunity to be with like-minded people. I didn’t specifically aim to win a prize, or think I would win the ‘Science for Development’ award or any prize let alone the overall Young Scientist award… But I did.

Did you have an opportunity to do further research on your project after winning these prizes?
As part of winning the Young Scientist in Ireland, I was entered into the European Young Scientist, for which I continued my research. As I’d learned that a lot of places in the Global South don’t have access to tin cans, or their cans are used for transporting potable water, I built a stove out of clay to continue my project. As well as some more refinement to the design, I wrote a manual, and I brought staff from various NGOs to our school, built the stove in front of them from scratch, and demonstrated how to use it. That summer I was also invited to work with a Professor and PhD student in Trinity College who were testing cooking stoves, with Seebeck effect (thermo-electric) generators on them.

Can you tell us about what you went on to study?
I studied Energy Engineering in UCC, which was a new course that Seán Foley told me about. My undergraduate degree was a blend of civil, electrical, and chemical engineering. In the latter two years you specialise in conventional sources of energy including fossil fuels, and look at renewables - wind, wave, solar, tidal, biomass or modern biomass. It had struck me when I was doing the project that the way we live today in the developed world is underpinned by the amount of energy we use.

Throughout university I had worked summers in different areas - after 1st year with Bord Gáis Energy looking at renewable energy technologies, after 2nd year I worked in the Hydraulic and Maritime Research Centre on wave and tidal energy, and after 3rd year I worked on solar energy in the States. After I completed my degree in 2014, I went on to do an internship with Professor Gerry Murphy in the biofuels research group and following this I received funding for three years for a PhD with Gas Networks Ireland.

What area was your PhD in, and what was involved in your research and experiments?
My PhD was on anaerobic digestion or renewable gas. It was looking at how much renewable gas you could make in Ireland, mapping out where the different resources are in Ireland, where would be the best place to build plants that convert this biodegradable resource into gas to maximise profit, and where would each plant source it’s material from. I also did a bit of work on running anaerobic digestion experiments in the lab, it was a nice blend of hands-on experiments and desk-based numerical analysis. 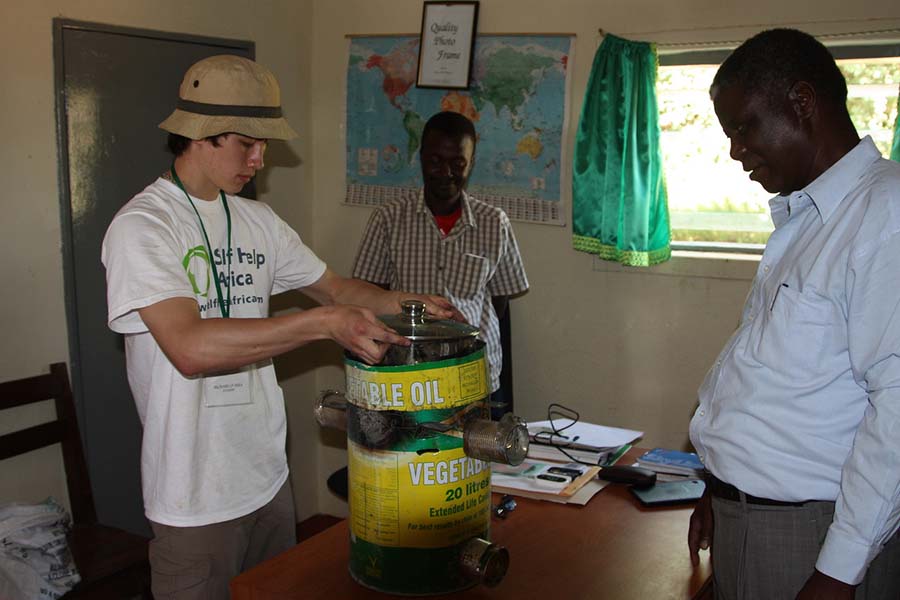 Richie demonstrating his stove in Zambia in 2011

After a little over a year working with engineering consultancy RPS, I was tempted back to UCC by Prof. Murphy. A company had come to him to get research done, looking at how they could reduce their greenhouse gas emissions. Anaerobic digestion played a role in that, so they had requested that I work on the project. During this time as a postdoctoral researcher, I developed a module that I delivered to students, and last April I applied for and successfully won a position as a lecturer in UCC, which is where I find myself now.

Would you be encouraged if a student or their teacher at a Secondary School reached out looking for advice or assistance on a project for the BTYSTE?
I would be very open talking to students and their teachers. I got help from UCC with my project - if a secondary school student comes to me looking for advice, I’ll give them the time because I was given the time. If they are looking to use experimental equipment that can be tricky as it’s being used by UCC students and there may not be space available. We have had visits to our lab from some secondary schools, looking at ideas for Young Scientist projects or looking for advice. We owe it to society to encourage young people with ideas because they are going to be the people driving this change.