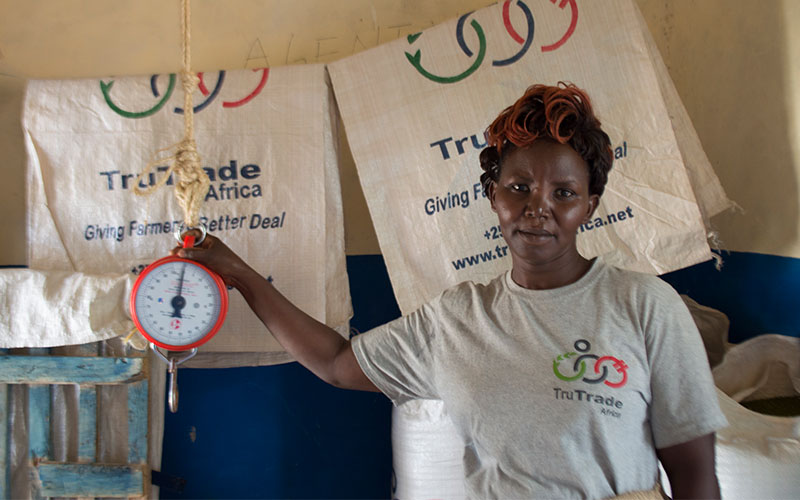 Since she opened the first TruTrade collection point in her village a few months ago, sourcing agent Agnes Mutisya says the lives of hundreds of local farmers have been transformed.

In the remote village of Kamusiliu in Kitui County, a dry and dusty plateau in Eastern Kenya, Agnes’ small shop stands out. A dozen, mainly women farmers, line up at the door to weight and sell their green gram, a staple legume grown in the region. The 42-year-old was trained by TruTrade last year, and subsequently was able to open her collection point in early 2018.

The social enterprise, a subsidiary of Self Help Africa, provides smallholder farmers with reliable routes to market and fair prices, and manages an extensive network of collection points across rural Kenya where farmers can bring their produce, receive mobile payment and build a trading record. For farmers in Kitui County, selling their crops through TruTrade has revolutionised the way they trade, and has increased incomes and financial security.

“My role with TruTrade is to ensure the produce meets our standards, and then process payment to the farmers through our mobile platform,” explains the mother of five. “The advantage is that farmers get paid on the spot. They also don’t have to carry cash anymore, which can be unsafe for women.”

Agnes says she’s proud to provide this service to up to 200 small-scale farmers in her area and says that TruTrade provides a much-needed transparency in the value chain:

“Because the market is kilometres away, farmers used to sell their produce at the farm gate, to brokers who would often offer a very low price. Now the market has come to them,” Agnes explains.

In addition to getting a fairer price, farmers can now trade any day of the week, which had an unexpected knock-on effect on children’s education in the area:

“School fees are due each week. Parents were sometimes late with their payments as they wait for the broker to come and pay them. Some children missed school because of that. Today, farmers are able to pay school fees on time.”

Agnes too is reaping the benefits of the arrival of TruTrade in the region. She now also sells groceries at her collection point, which provides her with a regular income throughout the year. In the past, the young mother, who grows sorghum and green grams on a her small farm, struggled to get an income during the post-harvest season:

“I used to do casual work on construction sites to earn an income when we ran out of food. It was hard work: I had to carry heavy buckets of sand and fetch water.”

“Today, with the extra income I make from my shop, and the commission I get as a TruTrade agent, I have enough money to provide a balanced diet to my children. I plan to build a trading record and get a small loan so I can buy livestock and start rearing them,” concludes Agnes.