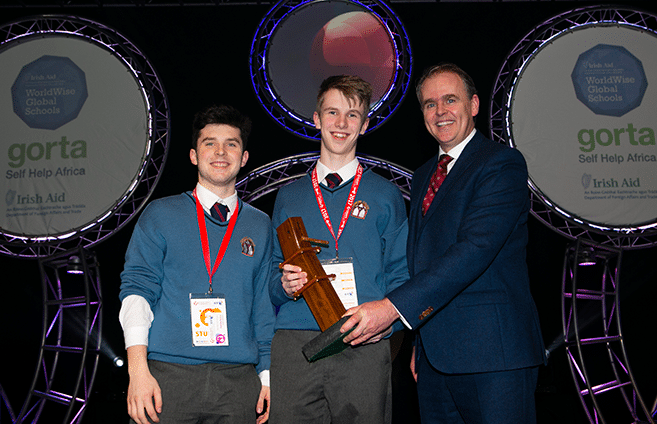 Jack O’Connor and Diarmuid Curtin from Desmond College, Newcastle West, Co. Limerick won the 2017 Science for Development project at the BT Young Scientist Expo, for their technology project, an Ergonomic Planter for use in developing countries.

Six year students, Jack and Diarmuid designed their planter to minimise seed/plant waste, improve production by ensuring consistency of planting, increase land usage by guiding farmers in their planting while reducing back strain and increasing speed of planting.

The students designed and built a device which is inserted into prepared ground, and uses a graduated built in depth gauge to ensure consistency of depth. The user simply drops the seeds/ plant down the chute, using a level attached to the handle, then opening a slot on the “V” of the device which allows the plant to remain in the earth whilst the user lifts the device from the soil. Use of this device will eliminate the user having to constantly bend over and will speed up the planting of crops. Several attachments have also been fitted to the “ergonomic planter”, e.g counter to enable the user to keep accurate count of the planting and a laser which points to the place the next plant is to be inserted. This laser can be adjusted and will ensure consistency of width between plants ensuring increased land usage.”

During testing, the students had measured the rate of planting, both manually and with the device, and noted considerable efficiency and increase in consistency with their ergonomic planter. Both Jack and Diarmuid were very excited that their project had come to the attention of the BTYST judges and were thrilled to receive their bursary prize.

While acknowledging that the planter had addressed some concerns in relation to the physical difficulties of repeated bending while sowing seed crops, the students have since taken on board the mixture of feedback they have received since the competition ended. Currently they are looking at options to add a coil mechanism to break soil and are also factoring in the potential to make the item locally from scrap metals such as bicycle frames.

Regardless of the potential developments and upgrades, Jack and Diarmuid have made no secret of their delight at the travel aspect of their win and in particular are looking forward to seeing the culture and environment, where the planter might be utilised. We have no doubt that looking at this solution at a local level, will likely produce more challenges to answer for this entrepreneurial duo.