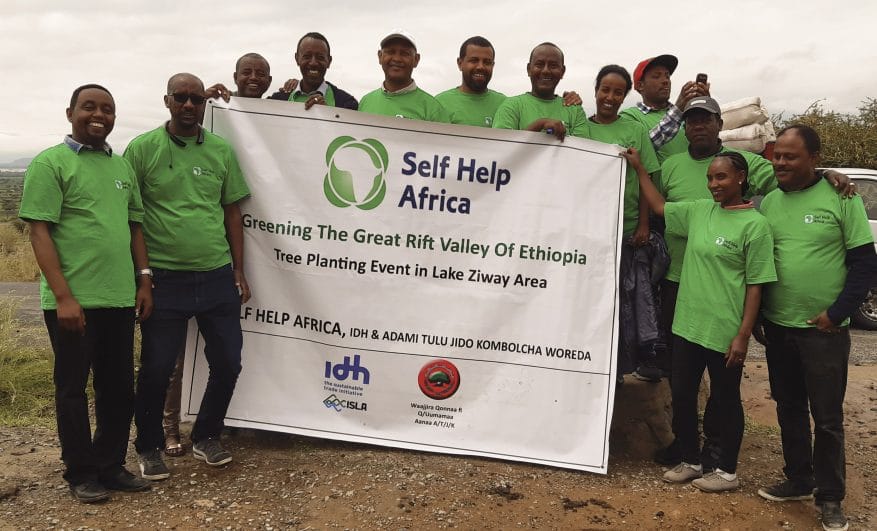 Self Help Africa is proud to have played a part in Ethiopia’s world-record breaking reforestation initiative, by planting tens of thousands of new trees in Ethiopia.

Our country team joined the Government-led initiative that is aiming to plant four billion trees in the country by the end of 2019. In a single day a total of 350 million new trees were planted in Ethiopia, according to officials.

Self Help Africa is working with communities, as part of Ethiopia’s green legacy, to plant a total of 300,000 tree seedlings on degraded farmlands around Lake Ziway, close to Adami Tulu, the site of the organisation’s very first African development project.

Working in collaboration with local farmers groups, thousands of tree seedlings were planted last week, as 15 country staff joined dozens of farmers and government officials to begin their replanting initiative at Lake Ziway.  The tree varieties chosen were selected to fix nitrogen back in depleted soils, and also provide ‘cut and carry’ fodder for livestock.

Self Help Africa’s team has been training farmer groups in the care and maintenance of the seedlings, to ensure that they are grown to maturity and can also offset carbon emissions.  A fully mature tree can absorb as much as 48 pounds of carbon dioxide per year and can sequester 1 ton of carbon dioxide by the time it reaches 40 years old.