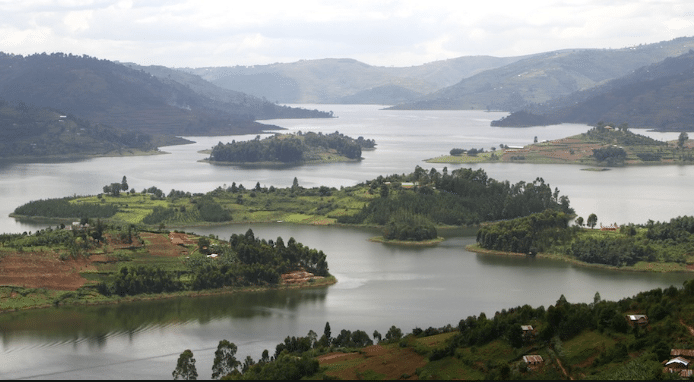 For generations, people living in the remote but picturesque Lake Bunyonyi region of south-west Uganda haven’t reaped the benefits of living in some of Africa’s most spectacular natural surroundings.

Indeed, the environment itself around one of Africa’s deepest, and most beautiful lakes, has made life more difficult for locals here, as the region has struggled to strike a balance between the needs for economic growth and the desire to conserve the natural habitat.

An innovative new project is hoping to change this, with a project starting that aims to create a sustainable ‘green economy’ through a range of job creation and training measures, and a targeting of the most vulnerable people.

Self Help Africa is collaborating with local district governments and the African International Christian Ministries in the EU-backed project, which is seeking to improve the lives of more than 130,000 people in the Lake Bunyonyi catchment.

In the coming three years the project will create 500 environmentally sustainable jobs across sectors that include horticulture, beekeeping, mushroom production, small livestock and sustainable energy. A further 500 farmers will receive farm and enterprise training, with the aim of increasing disposable income and ensuring that 80% of these households (3,500 people in total) have sufficient food all year round. A further 18,000 households in the region will benefit from the sale of sustainable energy products.

‘Striking a Balance: Developing a green economy around Lake Bunyonyi’ – will also provide a rare opportunity for often-excluded groups to access support.  Women, youth and the indigenous Batwa rainforest people make up more than half of the 1,000 direct beneficiaries.

The Kabale and Rubanda districts within the Lake Bunyonyi catchment are home to some of Uganda’s last surviving Batwa communities, 90% of whom are landless. The original indigenous people of this region, the Batwa have experienced some of the highest levels of poverty in Uganda. Discrimination and social exclusion restrict their access to already scarce job opportunities.

The wetlands location of Lake Bunyonyi is a further barrier to inclusion. Here, 75% of arable land is held under ‘customary tenure’ – meaning that households can own multiple small plots in different locations.  As a result, women, young people, and the Batwa  have traditionally been excluded from accessing resources and extension support. It is estimated that just 45% of the population currently receive such support.

By working with local communities around Lake Bunyonyi, the project hopes to ensure that the area’s abundant natural resources can be preserved.

‘The creation of a ‘green economy’ not only benefits the environment, but will increase employment, help households diversify their incomes, and improve health and nutrition of some of the most marginalised people in Uganda,” Self Help Africa Director Engorok Obin said.