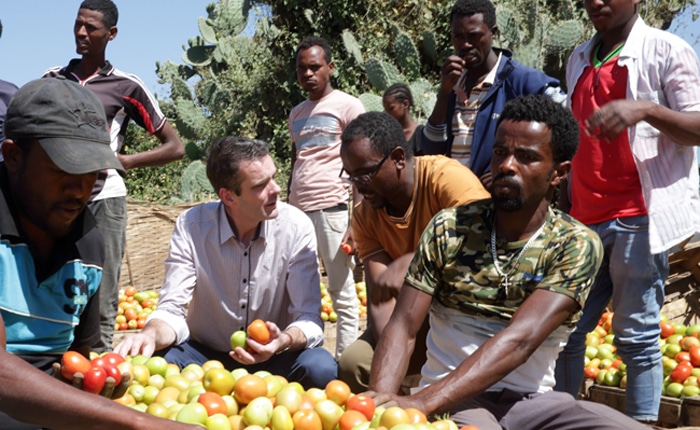 IFA President Joe Healy got a first hand chance to see the vital role that farming plays in the lives of Africa’s rural poor, when he visited Ethiopia and Kenya with Self Help Africa, last month.

“I knew that agriculture was significant but I was surprised to actually see just how important farming is to the lives and to the economies of people in both of the African countries that I have visited,” the IFA President said. “Families depend on agriculture for their survival. In many cases there’s no alternative, and that situation is unlikely to change any time soon. What Self Help Africa is doing is critical.”

Mr Healy travelled to Kenya and Ethiopia with CEO Ray Jordan, and met with farmers groups and associations, agri-businesse, and communities with whom Self Help Africa has been working, to strengthen agriculture and market access for farmers in the two countries.

The IFA chief saw the origins of the strong links that Irish farmers have with Self Help Africa, when he visits communities in Ethiopia that benefitted from some of the first activities that were undertaken in Africa with support from the Irish farming community.

Established in the immediate aftermath of the Ethiopian Famine of 1984/5 to deliver long-term solutions to the problem of hunger and extreme poverty in the region, the IFA was involved in some of the first programmes carried out by Self Help, including the shipment and distribution of 2,000 tonnes of Cara Donegal seed potatoes to famine affected communities in Ethiopia.

Mr Healy also visited Meki Batu Co-Operative Union, a 14,000 strong horticultural cooperative that traces its origins to that time. Today, Meki Batu has its own processing, packing and transportation systems, sells fruit and vegetables in regional and international markets, and is one of the main suppliers of vegetables on the long-haul flights of the country’s national airline.

Self Help Africa has been the long-standing chosen charity of the Irish Farmers Association, and is supported by rank and file IFA members with a range of activities, including hundreds of church gate charity collections, each year.