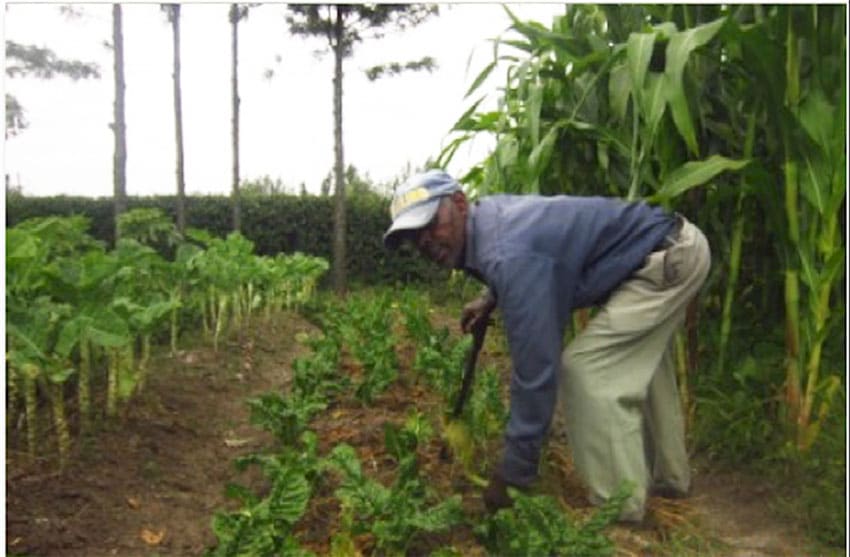 Membership of a support group for people living with HIV and AIDS in the Naivasha district of Kenya, has made a world of difference to Peter Mugo’s life.

He has built a new home on a part of his half-acre holding, and uses the remainder of his land to grow a range of fruit and vegetables in a bountiful backyard garden.

In more recent times he has added a dairy goat and two turkeys to his farm resources, while he also keeps 20 chickens, which supply his household with eggs.

Through the Self Help Africa APHIA Plus project, which is backed by US AID, Peter and the other 13 members of his Karita Umoja support group have received training in kitchen gardening techniques. In his case they have allowed him to optimize the use of his small plot with a series of multi-storey raised beds, water harvesting systems, and other labour saving measures.

“I am using different methods to keep my plants well watered, including bottle irrigation, drip irrigation, as well as a watering can,” he says.

Most of the crops that he grows are used for household consumption, although he does sell surplus from time to time to earn an income. He doesn’t have any alternate source of income, but nonetheless has managed to support his family and pay the fees of his school-going children.

APHIA Plus supports more than 3,750 households who are vulnerable as a result of HIV/AIDS in Kenya’s Rift Valley province. The project supports families with labour saving farming practices, and with the production of nutritious crops and produce that can help to improve diets and supplement existing household income.