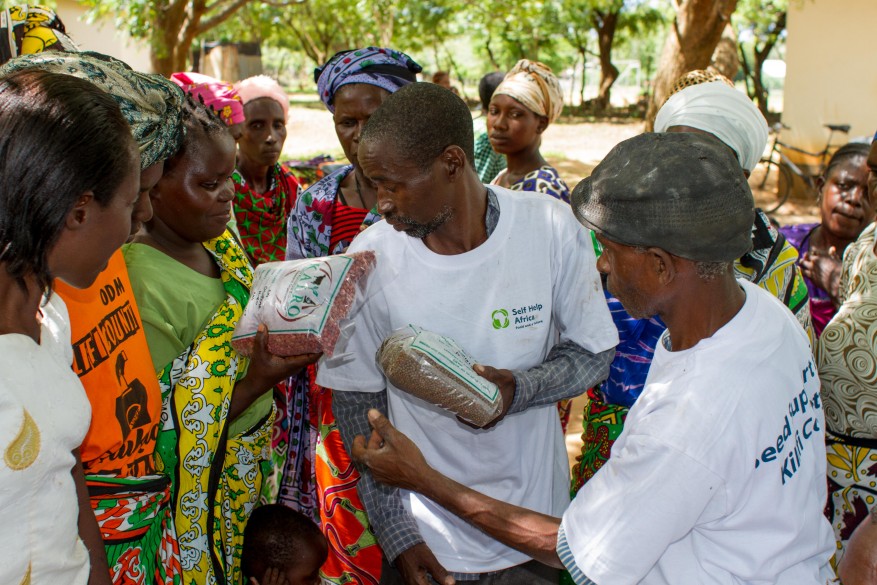 Please donate to help families affected by the food crisis

More than 10,000 people enduring heavy crop losses will soon be harvesting beans and other nutritious food, following an emergency seed distribution conducted by Self Help Africa in the drought-affected area of Kilifi, Kenya, last month.

The upcoming harvest will provide families with nutritious food for several months, as the country faces one of its worst food crisis in generations.

More than two million people in Kenya are currently in need of humanitarian assistance, according to the UN Food and Agriculture Organization. Prolonged droughts in 2016 and early this year have devastated crops across the country, including in the rural area of Kilifi in southern Kenya, where Self Help Africa has been assisting local farming communities for over two years.

The distribution of 5,000 kilos of green grams and cowpea seeds to 2,300 farmers – of whom 62% were women – will help them sustain their families in the months ahead:

“We estimate that a farmer’s family of six will be able to mitigate the effects of famine for about four months after the harvest, which will start in less than a month’s time,” said Rebecca Amukhoye, Self Help Africa Country Director in Kenya.

“The seeds were distributed at the right time, when the long rainy season started, meaning that the farmers were able to plant the seeds straightaway,” she added.

It is expected that farmers will save some of the seeds for the next planting season, something that many farmers couldn’t afford to do last year due to large crops losses. Seeds provide a mean for farmers to grow their own food, and as such provide a long-lasting solution to extreme food crises such as the one currently being experienced in many parts of East Africa.

“Immediate relief efforts provide sustenance today, but we need to ensure there will be food on plates tomorrow. Unless farmers have access to seeds, they will likely face further shortages in the future” explained Ms Amukhoye.

Other regions of East Africa affected by the food crisis have received support from Self Help Africa. In Boset, Ethiopia, 30,000 kilos of maize grain were distributed to 2,000 people last month.