2018 winner of the Science for Development Award 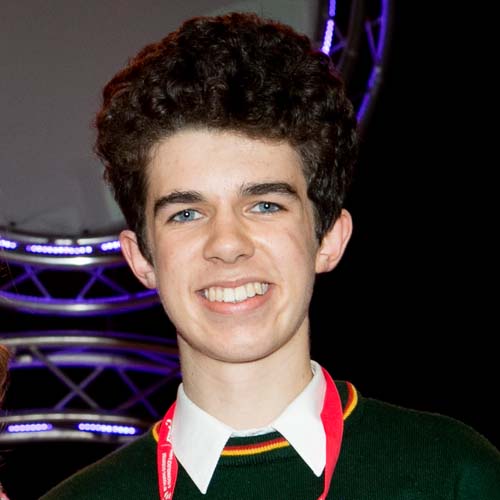 “BT gives a great chance to get experience in the aspects of STEM you could go into - I questioned whether I should have gone into a biological or technology field at 3rd level, and through my projects I had a great opportunity to experiment on what I really wanted to pursue.”

Overview: Research into using Genetic Engineering and CRISPR-Cas9 to cut a target Gene in Paramecium Caudatum so it feeds on Vibrio bacteria that causes Cholera.

Timothy won his prize while a Transition Year student at Kilorglin Community College, Kerry. He is currently studying Computer Science and Economics at University College Cork.

How did you come up with the idea for your project?
My uncle was a priest in a parish in Waterford, and he had visited Marimanti in Kenya. He raised funds for an irrigation system and a school over there. The stories he shared with me on his return really stayed with me.

In the summer of 2017, I was trying to think of a project idea for the next Young Scientist Competition and I came across a video by WIRED online magazine where a biologist explained the concept of CRISPR - that was my first encounter with the technology and it was really fascinating. I did more research on CRISPR and gene editing, realising the scope of what it could do.

The two ideas collided - stories from my uncle, and gene editing technology. Considering the water crisis in the Global South, and cholera being one of the biggest causes for diseases - could CRISPR edit or change something so that people can drink water which can be clean and not cause disease?

You had entered the BT before this, can you tell us more about your other projects over the years?
My BT journey started in 1st Year. A friend and I were encouraged to submit a project, an app for the visually impaired to navigate around buildings, our school for example. We based that project around a friend of ours at school who was visually impaired. Thankfully we had success with it and that’s when I got the bug for BT! The following year, I submitted another project relating to visually impaired people, sensor glasses for outdoor obstacles, to assist blind people navigating outside.

I then went on to the gene editing project in TY, and the year after in 5th I entered a project, again on water purification, but to do with deadzones in the ocean as well as fresh water. It used halophyte plants to combat that issue. So overall I completed a broad range of technology and biology projects throughout Secondary School. 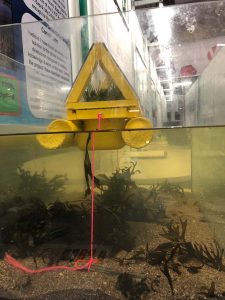 Your 2019 project was connected to the previous one. Had you done further research on your 2018 project before travelling to Uganda, or did it develop into this new project?

For the trip, I had wanted to develop it as much as possible or as far as I could go. In terms of the research of CRISPR, there were some limitations that I faced because of permission from the EPA and things like that. It was a nice progression that the next project I did was still to do with the Global South and water purification. I exhibited it at the BT in January 2019, and the following month I travelled to Uganda as my prize for my 2018 project. Luckily, I was able to showcase both projects when I went to Uganda because they both had a connection to the global south.

On your arrival to Uganda did you experience any major culture shocks?
From start to finish, it was an eye-opening experience. In the meantime, I’ve tried my best to describe it to so many people, but it’s not possible because it’s not the same! You must actually stand there and witness it to actually experience the full beauty of the Global South.

A resounding memory that struck me at first was that from arriving in the country and going to the villages and interacting with locals, African people are one of the most happy and joyous people I think that I have ever met. We were welcomed from start to finish, it was really nice that they were open to discussing what they were doing, and how Self Help Africa and Irish Aid were helping them. Also what actions they were taking themselves. That’s an important memory that I have, it was really fantastic for them to welcome us with open arms.

You presented both of your projects at Busitema University in Soroti, how was the response?
It was really, really great, the students there had a lot of questions for me. They were enthusiastic about what they could do in a similar way, or how they could do their own research projects and importantly what they could do to help their own community. I had built two machines for the project for cheaper than they would have cost and they were fascinated by how they could do the same or think of other ideas to do with other technology with problems that they faced locally, and to source materials cheaply and basically do a DIY project for themselves. That was great to see.

Why did you build your own machines for the project?
I needed two specific machines for my research - a PCR machine and a microcentrifuge - they cost usually in the range of €2,000-€4,000. The only place I could get them was a University and I didn’t have any luck with that, but I didn’t want to just stop the project there. I tried to work around it and the best way was to build them myself, which was not an easy task, but thankfully I was able to build them. When you come up against an obstacle there’s always a work around and it doesn’t have to stop you in progressing the project. 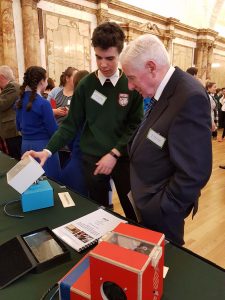 Showing PCR and microcentrifuge machines to Dr. Tony Scott at ‘Science for Development’ showcase at Iveagh house in 2018

You’re now studying Computer Science and Economics at UCC, have you found connections with your course and your projects, or with Science for Development generally?
Computer science has a strong connection with the Global South in terms of weather predictions, algorithms to help crop growth, or predicting crop failure, cameras and smart technology to predict diseases on plants - there’s a great scope for it. Having economics is important because you have a global perspective in terms of what computer science can do, or what good it could do for the world. I think I will keep the connection between computer science and the Global South in my work.

BT gives a great chance to get experience in the aspects of STEM you could go into - I questioned whether I should have gone into a biological or technology field at 3rd level, and through my projects I had a great opportunity to experiment on what I really wanted to pursue.

Have you been able to get involved with activities at University that complement your interests in global issues?
With a society in UCC now I am working on projects related to climate change. Enactus is a global organisation and the team in UCC has the mission of using social entrepreneurship, action and impact to create good for the world. The project that I set up this year is based on waste and plastic pollution as well as sustainable transport. ReFRAME is committed to producing products that target both of these issues by creating bikes out of recycled plastic for communities in the Global South, and we’re also now looking at creating smaller products like skateboards and scooters.

It’s an idea that came from my visit to Uganda, seeing the distances people have to travel and a bike could be used to get around. As well as that, electricity could be produced as they ride that could be used to charge a phone or power a fan, providing affordable green electricity as well as a mode of transport wherever the project is implemented. In visiting Africa and witnessing their world, I came home with even more ideas and possible solutions.