2016 winner of the Science for Development Award 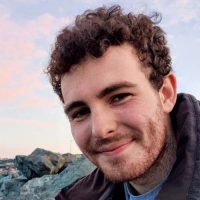 “The judges really do appreciate you having a well-rounded view of your research, and that will make your project stand out. The BT isn’t hard data driven, all you need is a good idea, and some execution of that good idea.” 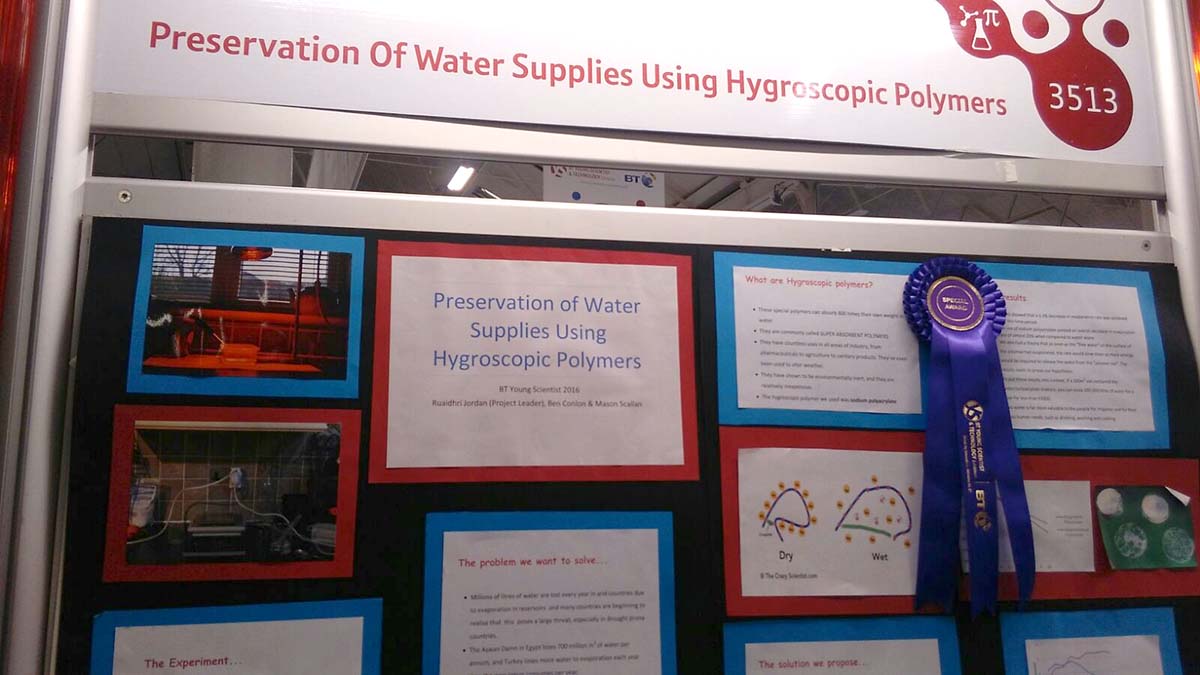 Overview: We plan on reducing the effects of evaporation on the scarce supplies of hot countries using hygroscopic polymers to form solid gels.

Ruaidhrí won his prize as part of a group project while a Transition Year student at Salesian College Celbridge, Kildare. He is currently studying Human Health and Disease at Trinity College Dublin.

How did you come up with the idea for your project?
In around 2015 there were a lot of floods in Ireland. They were using sandbags to bank up doors, and I became curious to find out if there was a better way to help with flooding and drying up afterwards. Sodium polyacrylate is a chemical polymer that can soak up water, but we realised it was too slow to be suited for use as a flood barrier, so we started looking at its other possible applications.

And how did you come up with the idea of trying to preserve water in developing countries?
We learned that as much as 80% of water in African countries can be lost to evaporation. No one was really addressing the issue in an African context - there was another method being used in America which was very expensive and also released harmful chemicals including known carcinogens into the water. We thought there must be a better way.

What are some of the advantages of using this particular polymer?
Sodium polyacrylate creates a layer over water supplies making it cheaper than using or installing water tanks. It has other unique benefits too - the complex it forms is transparent and has the same UV index as water, so sunlight can pass through it and kill bacteria, sterilising the water. That’s really good for storage. And it’s entirely inert and doesn’t break down into anything that could be harmful.

Was there any individual who influenced your work or offered other support?
My mum is a science teacher at Pobalscoil Iosolde in Palmerstown and a chemist by trade, so I bounced a lot of my ideas off her in the summer of 2015. Then Ben Conlon, Mason Scallan and I came together and formed a group that September. We were in TY and had no idea of scientific methods or analysis, and my mum helped us a lot with advice on designing the project, how we could set up our controls and record results.

Did you come up against any challenges in collecting your data or was it straightforward?
Well, the evaporation rates of water are really weird! It’s a lot faster on the top and slower on the bottom, and when you take something away from the heat source it continues to evaporate because it’s still warm. We picked time points and measured the evaporation by weight.

We had to be particular about our equipment, using a really, really accurate weighing scale to record decigrams and milligrams, one sensitive enough to get a good curve. Finding a suitable container was surprisingly difficult! Anything too conductive of the heat created abnormalities and inconsistencies, we were losing too much heat to the environment using metal. We settled on plastic tupperware because plastic is insulative.

Your travel bursary brought you to Malawi. How was your experience of arriving, and what surprised you?
When we got off the plane, we were in the middle of the desert as far as I was concerned, and it was hotter than I’ve ever experienced. When we visited the University, there was lush, green growth there compared to the desert-like environment, the difference was mad. I was 16 at the time and thought the world couldn’t be much different from one place to another, but visiting Malawi broadened my mind. 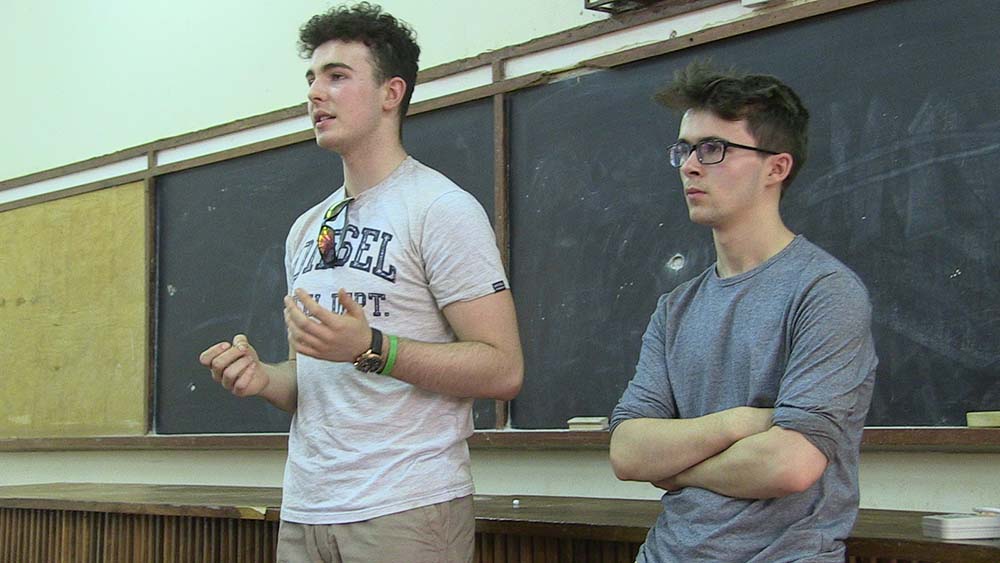 Ruaidhrí and Ben presenting at the University

What did you learn from your experience presenting your project findings to university staff and students?
We presented for the innovations department in the college, it was really inspiring. One of the staff that African problems require African solutions. Another speaker at the same event presented on water irrigation methods in the United States. The response was that it was a great method, but if their power cuts out every 3 hours in Malawi, it wouldn’t work, so they needed an alternative to suit their infrastructure. Self Help Africa is providing the resources for them to come up with their own solutions there - it’s not something we can solve for them because our experience of life is so different.

What was your favourite part of the visit?
Overall, my favourite part was not any of the places we went, but travelling between them, looking out the windows of the bus and watching the countryside go by. We visited Lake Malawi and went out on a little boat, there was stunning blue water and hippos. I wish I could have gone for a swim, but we were not allowed - the snails that live in freshwater over there carry giardia and we had to get on a flight the next day. Flying from Malawi to Ireland with giardia is not something you want to be doing!

It’s a hugely research driven course, and you learn a lot from research papers. Much of it is cutting edge, which I really enjoy. A new paper will come out and the lecturer or tutor will tell us about it and discuss it with you. A lot of the focus is on writing your own papers, doing your own research, and interpreting articles.

And the content shares a connection with your trip in relation to the giardia parasite!
I actually wrote a paper last semester on cryptosporidium, which is almost the exact same as giardia - it’s essentially the Irish version. Another link with the visit would be in relation to HIV, the rates in Malawi are absolutely enormous, and they have started to decline for the first time in years which is incredible. You see first-hand the toll it's taking on people when you are over there and how desperate people are. That experience definitely motivated me towards this area of study. While we were there, we learned how Self Help Africa work, from agriculture to family planning education and education for girls. It’s so important and you can really see the impact that work has in person when you visit. 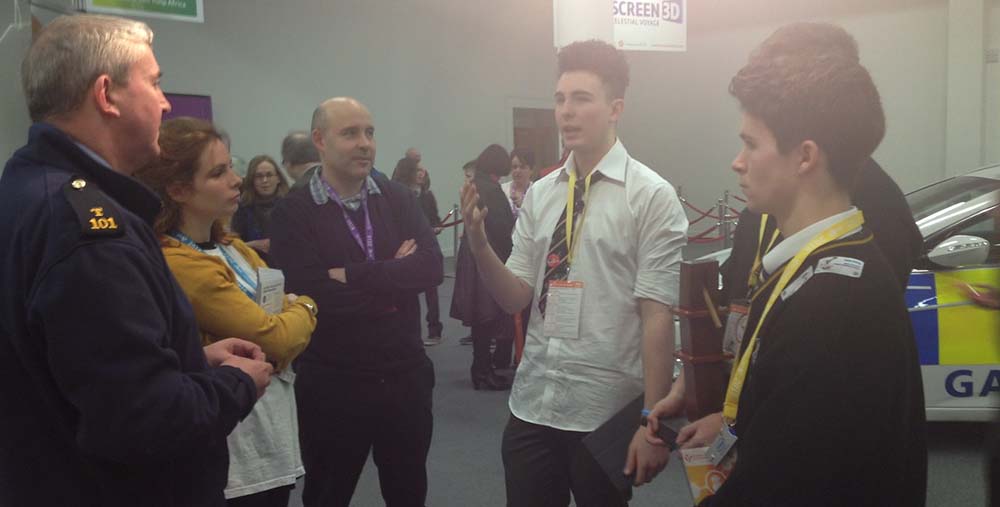 Ruaidhrí, Ben and Mason discussing their project at the Young Scientist in 2016

You’ve spoken about the aspects of your course, like research, that are of particular interest to you. Do you plan to take up a research role when you complete your degree?
It’s open for now, though definitely the current direction would be towards research, and I’m doing my internship in neuroimmunology now which I find exceptionally interesting. Another thing I’m considering is entrepreneurship. There are a lot of gaps in the biomedical sciences field that could be filled by start-ups and Irish businesses which would be good.

What advice would you give to students wanting to undertake a project at the Young Scientist?
Invest time into understanding the science of your project. My mum had explained how it worked, but I tuned out a bit as I thought all I needed to do was record weights and temperatures. The judging at the BT went great until the last judge who asked us if we knew how the bonds were formed, and we couldn’t explain how. You don’t need to have a degree in what you’re researching but understanding the key principles is important.

Try to look at the broader context of your project, I think this is a factor in how our project did so well. The judges really do appreciate you having a well-rounded view of your research, and that will make your project stand out. The BT isn’t hard data driven, all you need is a good idea, and some execution of that good idea.