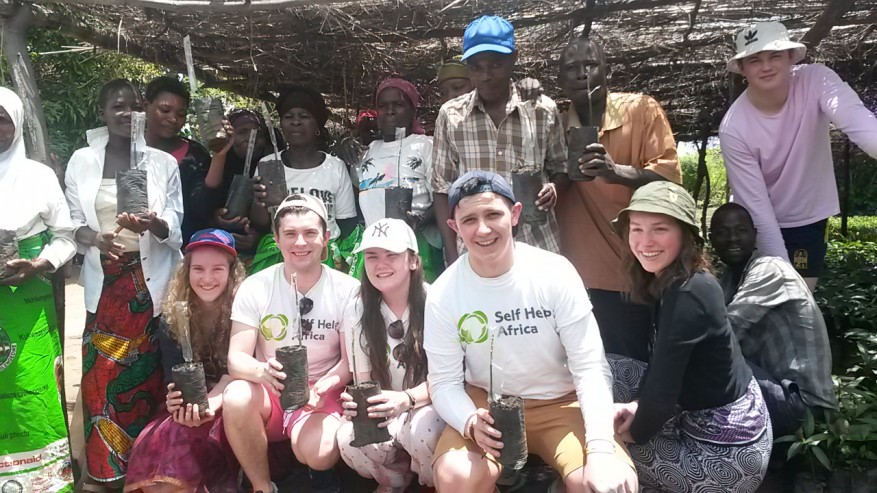 Students and teachers from five Irish secondary schools got up close to some of the biggest challenges affecting people in rural Africa when they travelled to Malawi on Gorta-Self Help Africa’s annual schools study visit, recently.

The week-long visit, organised by the Development Education unit at Gorta-Self Help Africa, took a party of 20 participants from schools in Dublin, Cork, Limerick, Wicklow and Carlow to the capital Lilongwe and onto the Balaka district in the southern part of the sub-Saharan country.

The group visited a local secondary school, a university, and met with farming communities, horticultural groups, women’s groups and villagers who are being supported by the charity to develop village-based savings and loans groups.

“The aim of the trip is to give the students and teachers a chance to see a part of Africa first hand, and learn more about the challenges that people here face in their daily lives – whether it relates to gender equality, climate, trade or the issues around farming and sustainable food production,” explained Dorothy Jacob, coordinator of the schools programme. “It’s about both deepening understandings and challenging preconceptions,” she added.

The visit takes place each year for schools that participate in Gorta-Self Help Africa’s programme of school workshops, and also carry out local fundraising activities that both support the costs of the trip and contribute to the work of the charity. The participants from each school are chosen in a selection process that includes an essay and an interview.

Students were encouraged to undertake their own research into topics ranging from gender equality to sustainable agriculture, climate change and ethical trade during their journey.

“It was interesting to learn that in Malawi, women traditionally inherit the land. It is also the women who do most of the physical work on farms but still, men control the income,” explained Anna Cluff from Sutton Park school in County Dublin. “There is definitely an increasing awareness about gender equality though. “

“I’ve learned that Malawi’s farmers rely heavily on a single crop – maize. Currently, the country is affected by an invasive caterpillar called fall armyworm. It is destroying a lot of the maize,” said Jessica Sweeney, attending school in Clonakilty. “With help from Gorta-Self Help Africa, farmers are starting to diversify their crops to cope with this threat,” she added.

“I was amazed by how innovative farmers are in Malawi. We visited groups that grafted fruit trees, others that were using intercropping to restore the soil. Trade also is developing; farmers are shifting from just feeding themselves to selling a surplus of crops,” commented Jack O’Connor, former student of Desmond College in Newcastle West, who took part in the trip as a winner of the Science for Development Award at last year’s BT Young Scientist exhibition.

The trip-of-a-lifetime was also a chance for the group to discover the culture of the country known as the warm heart of Africa. “It has been a fantastic experience. Everyone was so welcoming. Malawi is an amazing country,” concluded Laura-Ann O’Donovan, from Sacred Heart in Clonakilty.

“Our hope is that once the students and teachers come back home, they will share their learning and become engaged and active citizens in their communities, and take the experiences that they have with them into their lives in the years to come,” concluded Dorothy Jacob.