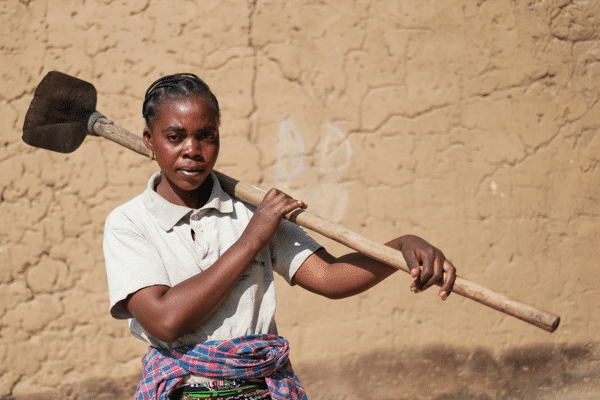 The road to safety and security has been long and difficult for 30-year-old Costa Uwimana. Forced to flee her home country of Rwanda to the Democratic Republic of Congo when she was only about eight years old, it was only a few months before Costa had to leave again, this time for Angola. The next eight years of Costa’s life were then spent moving from camp to camp, sleeping in tents and living off scraps of food.

As well as fleeing violence and conflict, Costa has also escaped two abusive marriages. Her eventual arrival at the UN-run Meheba refugee camp in north-western Zambia finally provided a safe and settled place to raise her five children.

Since arriving at the camp, Costa has joined a Self Help Africa graduation programme aimed at helping refugee families become self-sufficient farmers. As part of the project, Costa has received farming training, and has started her own small business.

“Before, I knew a traditional way of planting beans. From the training we were taught how to plant beans so we could harvest more. I used the remaining balance to do small business. I see people selling beans or maize, then I will buy and resell those crops” Costa says.

The impact on Costa’s life has been significant, and has eased her worries for the future. “Before I was involved in this programme, my children were not always going to school. When I had money, they would go, and when I didn’t they would stay home.

“Now, my children are going to school all the time and they are healthy. We are eating whatever we want to eat.”

Despite all the hardships she’s faced in her life, Costa remains upbeat and optimistic for her childrens’ future. “The thing that makes me happy is my kids. When I see my kids I feel proud of them. It makes me forget everything that happened.”