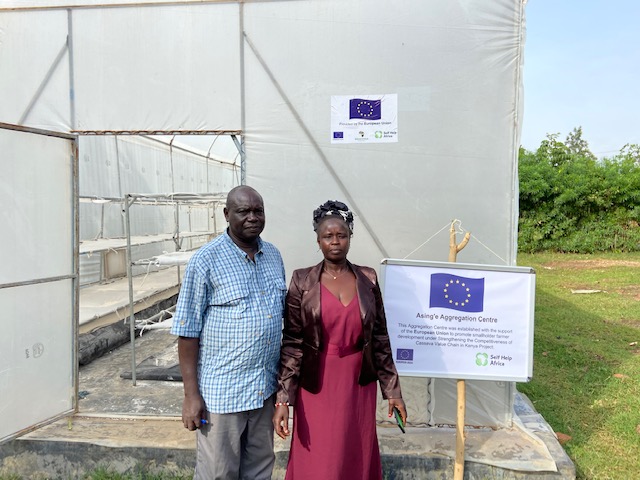 “Cassava in this area has been transformed” says Kenyan farmer Simon Okedi (pictured), from Busia.

It’s all thanks to a Self Help Africa project, funded by the EU, that has seen cassava production in the region blossom.

The crop, which is a root vegetable and a staple in many parts of Africa, does not stay fresh for long. Farmers are often forced to harvest small amounts at a time and sell in small quantities at local markets, often leaving the rest in the ground or letting excess produce to rot or for feeding animals.  ‘I would be feeding the snakes!’ laughs Simon – now vice-chair of Asinge aggregation centre in Busia, set up as part of the project.

Here, large quantities of cassava from the area can be brought together, processed, packaged and sold on in bulk to big scale buyers. This has helped opened up new markets to smallholder farmers even in the most remote areas.

“The aggregation centre has been a huge success” says Simon. “I’m much busier, and learning so much. We’re enthusiastic about scaling up further. I’m really proud of what the group has achieved so far. We have big plans for the future.”

Thanks to this training and improved access to seeds from KALRO and other suppliers, around 90% of the cassava being grown as part of the project is with improved varieties of seed, meaning it matures faster and is safer to eat.

The project, ‘Strengthening the Competitiveness of the Cassava Value Chain in Kenya’ is funded by the EU and run in collaboration with Ugunja Community Research Centre, USTADI Foundation, Rafiki Microfinance and Imarika SACCO.