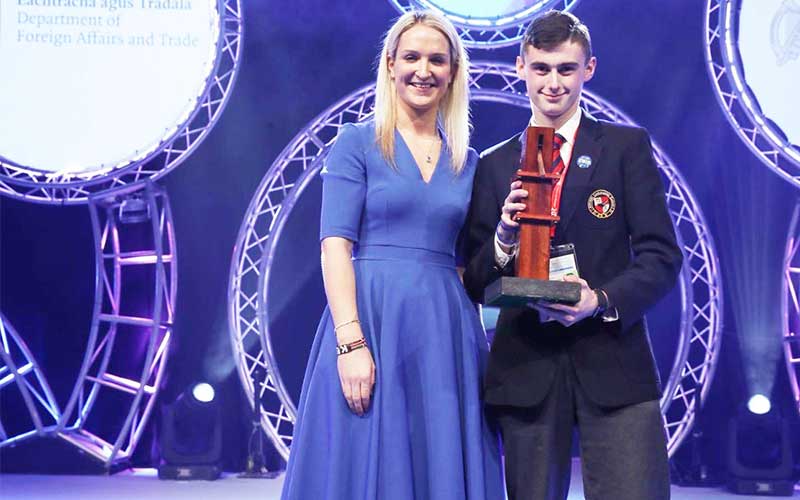 A Leaving Cert student from County Wicklow will get the chance to get up close with one of the biggest health challenges affecting people in the developing world, after winning one of the top prizes at this year’s BT Young Scientist and Technolgy Exhibition (BTYS) in Dublin, last weekend.

Seán Byrne (18) from Avondale Community College picked up the Self Help Africa run ‘Science for Development Award’ at this year’s BT Young Scientists Expo, and will receive an Irish Aid sponsored travel bursary that will allow him to travel to Africa to learn more and further his project work.

Seán, who is a ‘veteran’ of the BT Young Scientist Expo, having entered projects in each of the past four years, picked up the prize this year for a project that examined how eggshells can be used in the purification of water in the Developing World.  He had previously collected a second prize for a science project he had submitted to the annual schools science fair.

“I’m in sixth year now so I knew that it was my last year entering the BT Young Scientist contest. I really wanted to end it with an award, so I’m absolutely delighted, and proud,” Seán said.

Seán said he got the inspiration for his project after he read an article about the absorbent properties of eggshells. The young inventor devised a filtration system that allows to purify contaminated water: “First, the water goes through a sand filter to remove any suspended solids. Then it goes through vessels that contain eggshells, that’s where the purifying process happens. The last stage consists of using UV lights and a second sand filter to further clean the water.”

Seán says his experiments have shown that his invention is capable of removing almost 100% of metal contaminants present in water, including copper, lead and chromium.

The Wicklow teenager was presented with the ‘Science for Development Award’ by Minister McEntee. The prize provides a travel bursary to the winning student and their teacher, to allow the prize-winner to travel to Africa to learn more about how their project might work in practical terms.

“I am aware that contaminated water is a global problem. In developing countries, 14,000 people die each day because of water pollution. I wanted to help find a solution to that problem,” said Seán, who thinks his prototype could be replicated in the developing world with locally available material.

The Science for Development prize is organised annually by international development organisation Self Help Africa, with the winner and their teacher receiving an Irish Aid sponsored bursary to travel to Africa on a schools study visit to an African country.

“I’m excited about the opportunity to go to Africa. It’s a huge honour to go abroad and discover a new country. I’ll definitely bring my project and test it. But I want to do a bit more work on my project first, so that it suits better the country I’ll visit!” said Seán.