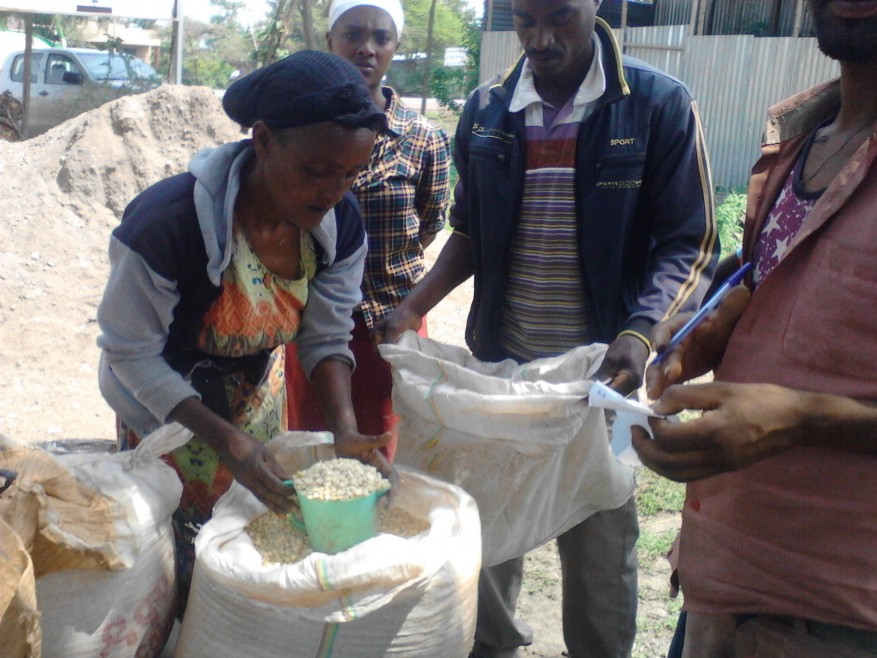 Please donate to help families affected by the food crisis

“I used to produce teff and soya beans on my one acre farm. My production was good, I grew enough to feed my family, even in a bad year,” says mother of six Ababu Wolde.

Queuing to receive grain from Self Help Africa to feed her family until she can finally harvest her new crops from her field later this Autumn, Ababu says that the devastation caused by two successive years of drought forced her to turn to charitable help.

“I barely harvested a single bag of grain in the last two years,” she says with resignation. “The animals that helped me plough the land have all died. My children don’t have enough to eat. I had to take them out of school,” she says.

Since 2015, rainfall has been poor to non-existent in the Boset region of central Ethiopia. Like many others across the country, the area experienced its worst drought in generations last year. The impact on farm families like Ababu’s has been catastrophic, causing wholesale crop losses and death of livestock.

For Self Help Africa, the current crisis prompted an unprecedented response, as the organisation opted to provide food aid to farming households for the first time ever. Maize grain has been provided to close to 3,200 households in Boset, with the intention to tide them over until new crops can be harvested from their fields in late October.

In addition, Self Help Africa distributed teff and haricot bean seeds to close to 400 farmers. There is hope that the new harvest will be good, as rains arrived early this year.

“I have sown teff on my land,” says Iffa Yadecha, a young farmer and father who also received maize grain. “The rain looks good, and if it stays this way until my crops mature, I’m hoping to harvest enough to feed my family for the next year. In the meantime, the maize I received from Self Help Africa will help me bridge that hunger gap.”

According to the UN Food and Agriculture Organisation, 7.8 million of Ethiopians needed emergency assistance to meet their basic food need in 2017 alone.