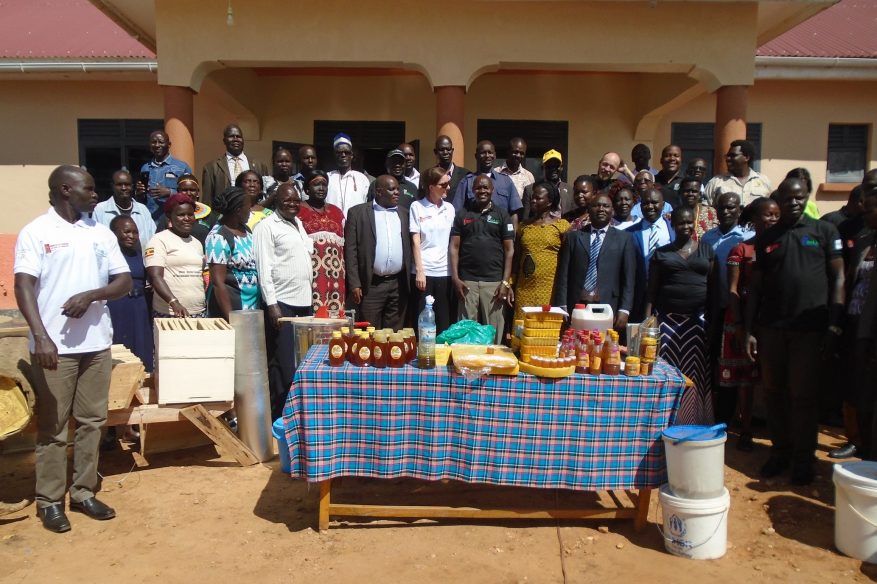 A region of Uganda once known for violence and conflict is today being reshaped as the country’s ‘home of honey,’ and Self Help Africa is playing an important part.

A newly-launched project is set to build on Karamoja’s buzzing potential, to create employment and income opportunities for more than 2,000 young people across this part of Uganda’s north-east region, over the next four year.

‘MORE-Honey’ (Market Oriented Rural Enterprise) will support the production, processing and sale of honey and beeswax. The project will also increase the hive productivity of an additional 2,000 honey-producing farmers living in the area.

MORE-Honey is being co-funded by the Danish Development Agency DANIDA and Irish Aid. The project will be implemented by Self Help Africa alongside local and international partners, Golden Bees Limited of Kampala, Denmark’s Swienty Commodities ApS and German natural cosmetics manufacturers KahlWax.

At a recent launch, State Minister for Karamoja Affairs, Moses Kizige spoke of the distinct taste, nutritional and medicinal value of Karamoja honey. He also highlighted the huge potential of honey production for assisting local people to move from aid dependency to self-sufficiency. “It is honey of a quality to match anything found in the world.”

Self Help Africa’s Uganda Country Director Engorok Obin pledged that Self Help Africa and partners would do everything they can to support and help farmers in the region, not only in order to increase incomes, but also to support the development of an equitable and profitable value chain for honey production in one of Uganda’s poorest regions.

For decades, Karamoja was a centre of tribal conflict and ethnic violence. During the 1980s, the region was occupied by Uganda’s notorious warlord, Joseph Kony’s Lord’s Resistance Army.

Keep up-to-date on MORE-Honey and our other work around Africa – sign up for our emails here.

Check out the video below to learn more about beekeeping and honey production in Uganda: