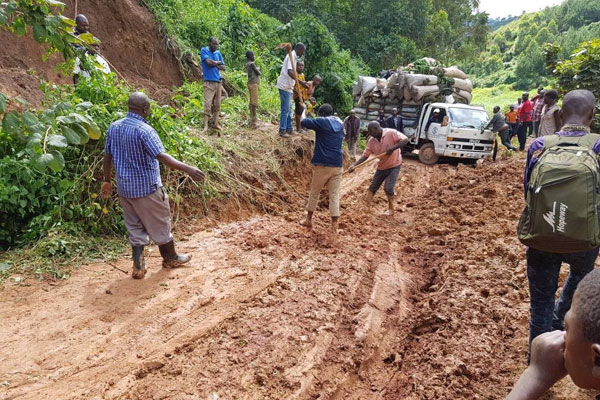 Extensive tree planting, check dam, water trench and terracing construction have protected communities in South-western Uganda from the worst effects of severe flooding that has hit the area in the past month.

Preliminary reports from the Lake Bunyonyi region, where many small farms are perched on steep slopes that fringe the lakeshore, environmental protection works supported by Self Help Africa have spared many families from the worst damage, says Agricultural advisor Robert Gensi.

Across the region, heavy and sustained rains have caused floods and mudslides that have swept away homes, submerged farms, destroyed bridges and left roads inaccessible. Approximately 175,000 people have been affected, according to government reports.

For two years, Self Help Africa’s ‘Striking a Balance’ project has been working with communities in Kabale and Rubanda Districts of SW Uganda around Lake Bunyonyi; supporting them to institute measures that will help utilize their land more sustainably, while also protecting the lands that are farmed around the lake.

These works have included extensive terracing, and since the beginning of 2020 the planting of approximately 80,000 new trees.

“Lake Bunyonyi is extremely vulnerable. We have called this project ‘Striking a Balance’ between the need for households to utilize their farmlands in a balanced way that allows them increase farm productivity, without contributing to the erosion of soil from the slopes and the consequent siltation and destruction of Lake Bunyonyi itself,” Robert Gensi explained.

Surveys carried out in recent weeks indicate that tree planting efforts, together with check dams, vetiver grasses and water retention trench construction interventions have provided villagers with a higher level of protection from the floods and mud slides than have been recorded elsewhere.

“In torrential rains it is a case of slowing the momentum of the run-off waters as they cascade down the hillsides. The work that has been done has helped us to prevent a significant amount of the damage,” Project manager Jane Amumpaire said.