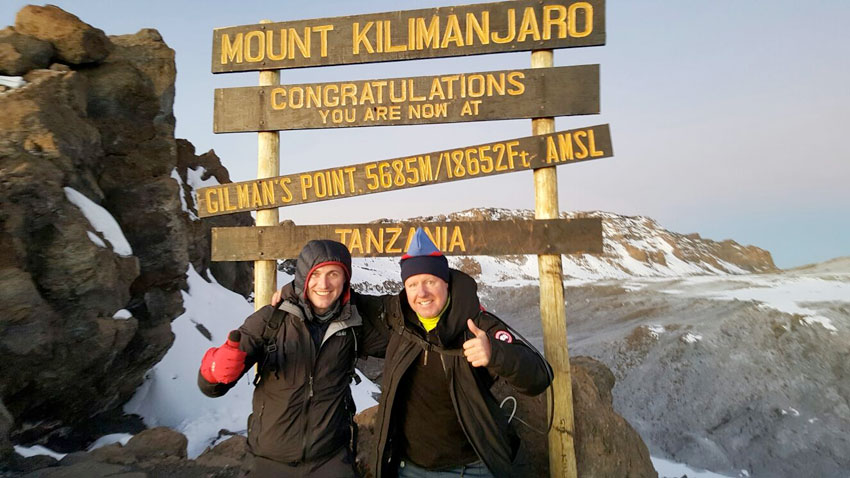 Tom Nichols had more than one reason for feeling on top of the world last month when he completed an incredible journey to raise funds for Self Help Africa.

Tom, a senior executive at Enstar, a publicly traded company established to acquire and manage insurance and reinsurance companies, joined fellow Self Help Africa supporter Karl Wall when he climbed to the summit of Africa’s tallest mountain, Kilimanjaro, in late December.

He had a special reason to celebrate the spectacular sunrise from the rooftop of Africa too – for the tough climb came on the first anniversary of a catastrophic road traffic accident that could have cost him his life.

Tom required extensive surgery after he was hit by an out-of-control car that mounted the sidewalk close to his home.

“I broke my wrist, elbow, ribs and toes in the accident, and had a permanent titanium rod inserted in my leg from knee to ankle,” he said.  “At first I didn’t fully appreciate the extent of the injuries”

A long-time supporter and champion of the work of Self Help Africa, Tom resolved to take something positive out of the experience however, and while in recovery, he asked his former colleague and good friend Karl Wall, CEO of Aylesbury Aquisitions and the Chair of Self Help Africa’s New York Advisory Board, to join him on a fundraising climb of Kilimanjaro. His surgeon called the ambition “wildly optimistic”.

“I had seen the charity’s work at first hand on previous visits to its projects in Ethiopia, Uganda, Malawi and Zambia, but on this occasion I wanted to do something really positive – both for myself, and for the organization.  What could be better than to take on a challenge and climb Africa’s highest mountain.”

Tom received incredible support from friends, family and work colleagues for his effort, and has to date generated more than $12,000 to support Self Help Africa’s work.

Tom Nichols and Karl Wall are both members of Self Help’s US advisory board, and were co-chairs of the organization’s hugely successful Change-Maker’s Ball in New York in 2014.

You can still donate to support Tom and Karl’s incredible effort by visiting: