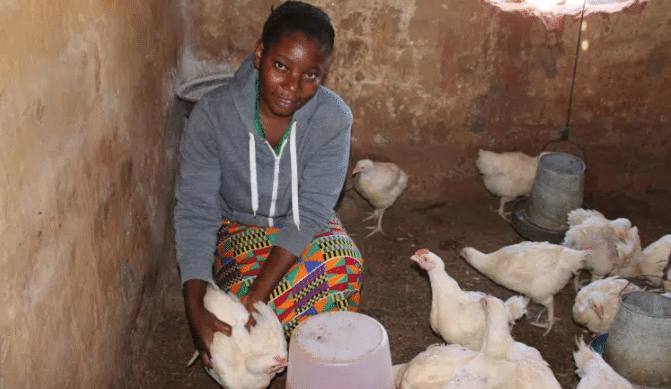 Poultry rearing is a major source of income and of nutrition for rural poor households in Zambia. More than 1.1 million in the country keep chickens, and the country’s poultry population provides a valuable source of income, eggs and meat for the national diet.

For Judith Nanyangwe from Kanakantapa village, chickens are also a business, as she earns an income from both the sale of chickens and from selling eggs, for which she receives 120 Zambian Kwacha (€5.30) per tray.

Judith is amongst the households in Monze and Chongwe Districts being supported by AGCO and Self Help Africa’s Upscaling Poultry Project. She’s a member of a poultry rearing youth group who have received improved breed broilers, training in best-practice animal housing and care, and received incubators that they use to store eggs prior to hatching. “The rate of birth of chicks and quails that have been stored in the incubator is far higher,” she says.

Poultry breeders being supported by the project each receive four chicks, while each groups taking part were given 200 start-up chickens to support their poultry rearing. The project also assisted with other resources including feed and vaccines, and providing training in care, management, feed and business skills.

“The project has really helped people,” says Tobias Mzonbola, a poultry farmer in Ndombwi, who says his income has increased and he’s using the profits he makes to send his children to school. “I received broiler and village chickens, and was trained in how to provide my birds with better housing and an improved diet that included use of soya.”

Kuzanayi Tembo said that farmer groups had also attended sessions on nutrition education so that they could provide a more balanced diet for their households.

Smallholder farmers like Tobias and Kuzunayi face a range of challenges in poultry rearing, including limited access to extension service advice and limited access to drugs that may be required to treat avian diseases.  “Providing better housing and diet for our animals, and improving hygiene is reducing incidents of disease,” they say.

This work was made possible by the support of AGCO Foundation.