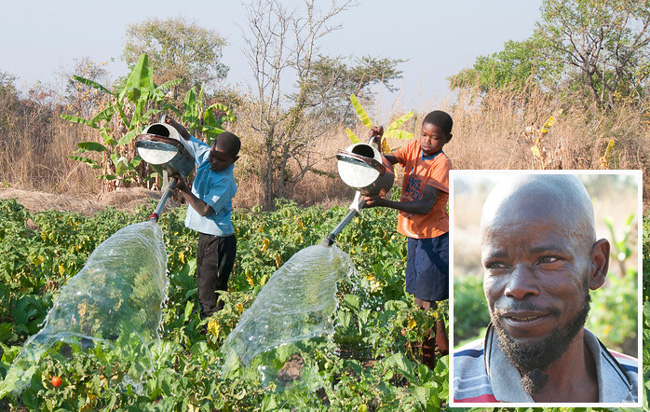 Misheck Mwanza struck just the right chord when his band topped the Zambian charts with their single “Lazy people run away from farming” a quarter century ago.

But the song didn’t last and a career in music didn’t last either for Misheck, who with his band ‘The Five Senses’ made the long journey home from capital city Lusaka to farm around Chipata district in the far east of the country, three years later.

Today, Misheck is a lead farmer working with Self Help Africa, using his immaculately tended four-acre farm holding as a demonstration plot where he promotes a range of innovative ‘climate smart’ agricultural techniques to his neighbours and close to 100 other farm families around Bendo village.

A self-taught guitarist who first picked up an instrument when he was in his teens, Misheck Mwanza was newlywed when he and his young wife Gertrude set off for Lusaka and a career in music, in 1984.

Despite the fact that ‘The Five Senses’ had four popular hits within the space of two years and received regular radio airplay, Misheck says that they received just 10% royalties on their record sales, while the music was also pirated and sold on cassette tape more often than it was bought officially.

In 1987 they called it a day and returned to Bendo, and set about farming a plot of scrubland given to them by the village chief. Shortly afterwards the couple’s first child, a daughter was born. They named her ‘Nature.’

Today, Misheck and his family grow maize, as well as cabbage, tomatoes, onions and other vegetables on a plot that is criss-crossed with irrigation channels, and on which he employs crop rotation, and uses an array of conservation agriculture techniques including zero tillage, composting, manure making and fertility basins. ‘

We used to struggle to make enough for a young family, but today we have a good business,’ Mishek Mwanza says. ‘I have been supported with training to become a lead farmer, and grow and sell different crops, as well as giving advice and training to others.’ Misheck Mwanza says it’s as true as ever today that, to quote the song: ‘Lazy people run away from farming’.

But not for a moment would he change his life or leave the land that he farms. He has long since sold his guitar, has no copies of his old records, nor any press cuttings from his day in music. He does occasionally hear his songs on the radio however, but says that he has not a single regret that he’s a hard-working farmer today.

Self Help Africa has supported training for thousands of ‘lead’ (extension) farmers in projects across Zambia, providing them with training, seed, and other inputs so that they can assist and train others in their communities in practical and effective methods to make their small-farms more productive.