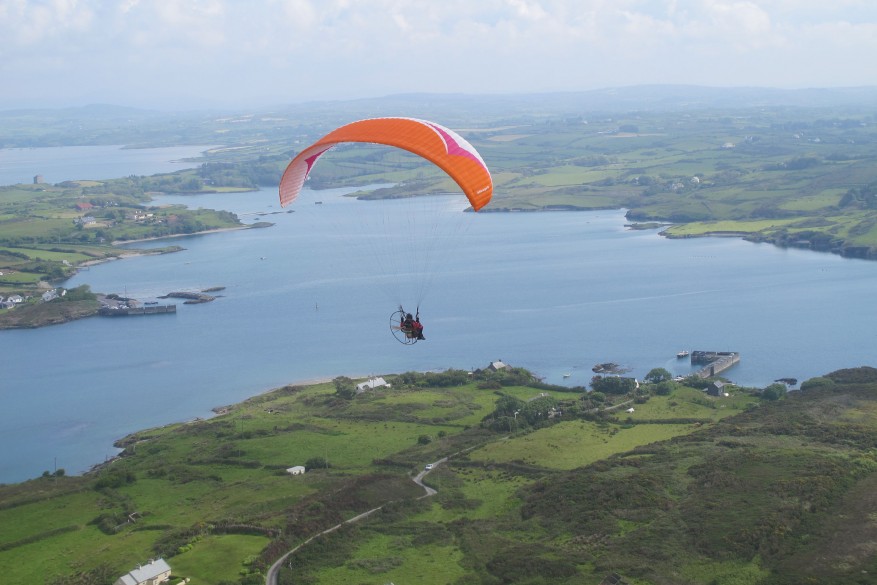 An architect is aiming to achieve a new record, when he flies from Ireland through the UK, France and Spain to Africa this summer on a craft that is powered by little-more than a lawnmower engine.

Oisín Creagh will become the first person to deploy a ‘paramotor’ for a journey that will take him from Ireland, through Wales, England, France and Spain, before arriving in his final destination in North Africa.

The self-employed architect will embark on the 3,000km journey in late Summer, including over 100km flying over sea. He is making the trip to fundraising to support the work of Self Help Africa.

Amongst just a few dozen paramotoring enthusiasts in Ireland, Oisín Creagh regards his sport as “one of the simplest forms of powered aviation available to humankind.” His paramotor is a specific type of motorised unit fitted with a propeller blade that is mounted on his back on a rucksack-like frame.

Powered by a small two-stroke engine similar to the motor of a lawnmower, he should potentially be able to cover up to 150-200km of his trip, per flight, travelling at up to 60km an hour. The Paraglider (known in paramotoring as a ‘Wing’) is essentially a parachute, very similar to those used for paragliding, but with a motor.

Oisín is predicting that it will take him approximately a month to cover the distance, but says that a huge amount of the expedition is dependent on getting the right weather conditions.

“Too warm, too windy or too wet and you just can’t fly,” he says. This explains why he is planning his departure from Ireland for some time in mid to late August, with much of the trip taking place in September. Flights will generally be early in the morning and late in the afternoon, to avoid the ‘active’ conditions of the warm middle of the day.

He expects to be travelling at an altitude of approximately 1,500ft for much of the journey, although over the Irish Sea, English Channel and Straits of Gibraltar he will be higher. He will also need to ascend to heights in excess of 6,000ft for the leg of his journey through the Pyrenees mountain range, which separate France from Spain.

The amateur flier says that he is currently planning for the trip, and is in discussions with  international aviation authorities through whose airspace he will travel on his journey. “Because paramotoring is a relatively new sport and a very different kind of flying, there are differing regulations on it in different jurisdictions. I have been a good while planning the route, and am addressing the varying rules and issues as they arise.”

Oisín is hoping to raise thousands of pounds to support the work of Self Help Africa, whom he describes as an organisation “making a real difference to the lives of some of the very poorest and most disadvantaged people in the world.”

“In a region of the world where up to 70% of people rely on small plots of land for their very survival, it is only by improving farm production that millions of people will be able to work their way out of poverty,” he says. He is specifically hoping to fund work that the charity is implementing in drought ravaged Ethiopia, where crop failures are impacting on the food supplies of close to 20 million people, this year.

You can support Oisín’s upcoming flight by contributing to his fundraising here: Sponsor Oisín