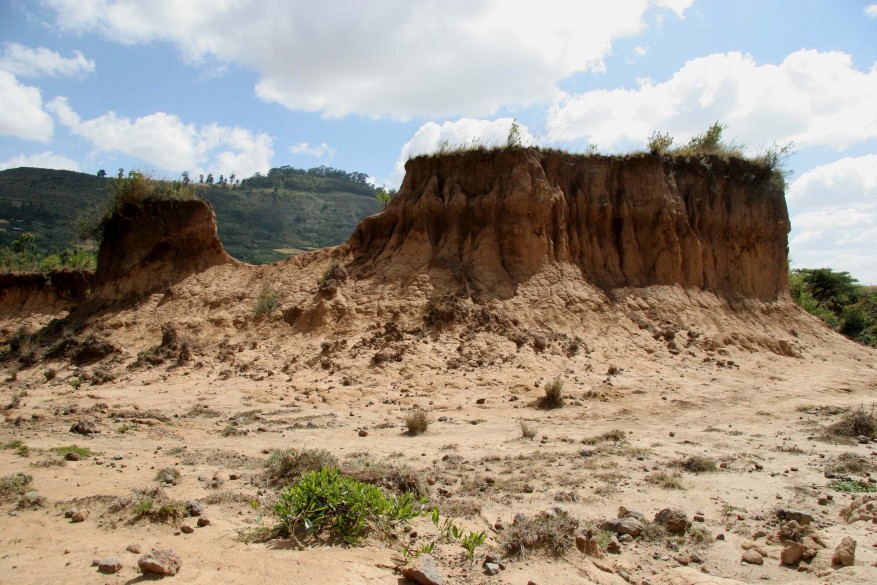 The challenge of changing climate for farmers in hot dry regions of sub-Saharan Africa is well documented.

In the heartlands of Ethiopia the unpredictability of weather, and in particular the frequent changes in rainfall patterns has had a dramatic and damaging impact on household food production, and on the ability of rural poor families to produce the crops that they need to survive from one season to the next.

Self Help Africa is currently working with over 15,000 farmers in the populous Southern Nations and Nationalities province (SNNPR) on an integrated agricultural development project that is promoting a broad range of ‘climate smart’ activities designed to enable farming households to remain productive in the face of changing climate.

A community nursery  has to date distributed close to one-third of a million tree seedlings,  while environmental rehabilitation measures are being initiated to regenerate badly eroded pasture land, conserve the natural environment and minimise the ecological footprint that farm households have on the land that they rely on for their survival.

The production, through community-based seed distribution networks of a range of ‘drought tolerant’ cereal seed varieties is at the heart of the project, alongside a range of other ‘smart’ farming methods that help farming households to conserve water and nutrients in the soil.  Measures like crop rotation, inter-cropping, and the propagation of nitrogen fixing beans, peas and pulses is being encouraged.

Indeed, the central focus is on farm production, and alongside providing access to improved seed, Self Help Africa is promoting a broad range of ‘climate smart’ farming measures that support increased production, while enabling rural poor households to be a part of the solution, rather than the problem of global warming.

Self Help Africa has also supported the development and distribution to farmers of a locally designed ‘low impact’ plough, called locally an ‘arash wogel’, which has allowed cereal crops including maize, wheat and teff (local cereal) to be planted with minimal disturbance and loss of moisture from the soil.

Use of the new tool – designed by a local contractor in consultation with Ethiopian farmers – has led to dramatically increased yields, and has resulted in a sharp uptick in the numbers of farmers now using the device.  This year alone over 200 arash wogel are being distributed, as compared to 50 in the project area a year earlier.

Elsewhere, the project in SNNPR region is supporting women’s groups with alternate farming activities including poultry production, irrigated horticulture and backyard vegetable gardening, and promoting the use of locally manufactured fuel-efficient cooking stoves, of which 500 were distributed this year.   Across the project area youth groups too are being supported to become involved, and are involved in activities to enclose and rehabilitate badly degraded areas.

Within these enclosed areas, fodder crops are being grown that can be ‘cut and carried’ out to livestock, beekeeping is being practiced, and rainwater gulleys are being restored and protected.