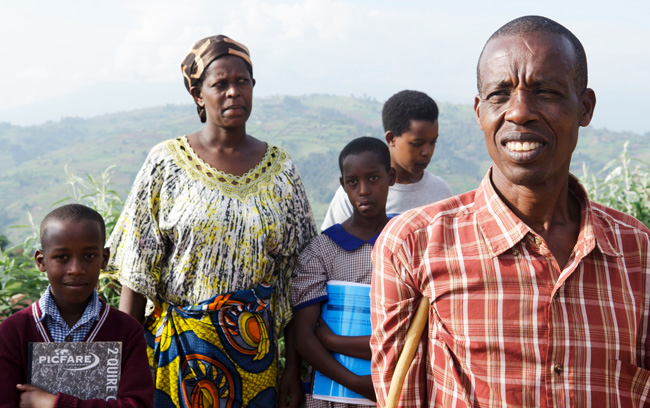 A club foot that makes it difficult to farm the steep mountain slopes of Bukimbiri district in Uganda is just one of the obstacles that 54-year old Emmanuel Ngororano has had to overcome in his life.

But he has succeeded in producing enough to keep his family fed, although he struggles to afford the ever-increasing costs of sending his children to school.

“I want my children to be doctors and lawyers, but education is so expensive. I am getting old, but for as long as there is school to be paid for I still have work to do.” 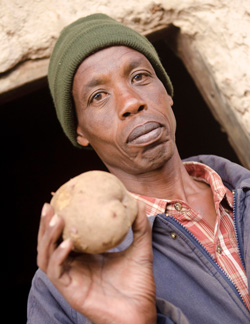 Emmanuel has had his deformity since birth. But although it has been a struggle, it hasn’t prevented him from establishing his own potato growing business on the scattered hillside plots that he farms in the area.

A farmer training scheme organized by Self Help Africa has shown Emmanuel how he can earn more from his work. Previously, he used to sell his harvested crop by the roadside to passing traders who would arrive in trucks.

But now he is supplementing his income by sprouting some of his crop and selling the resulting seed potatoes for a better price to other farmers in the locality. Emmanuel still sells the bulk of his crop to the passing trucks but now he also has the added income of selling seed potatoes locally.

He has increased his profit without increasing production. Up to 70-80% of Uganda’s potato crop is grown in Uganda’s south-west region, where Emmanuel has his farm. Producers in the area have limited access to training and support however, and are frequently targeted by passing traders who pay just a fraction of the value of the produce that they buy.

Self Help Africa works with these communities to help them to access new markets, add value to their crop, and ultimately earn more from their farm work. In Emmanuel’s the increased earnings are being invested in his children’s education. 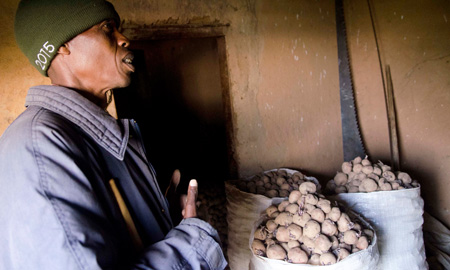