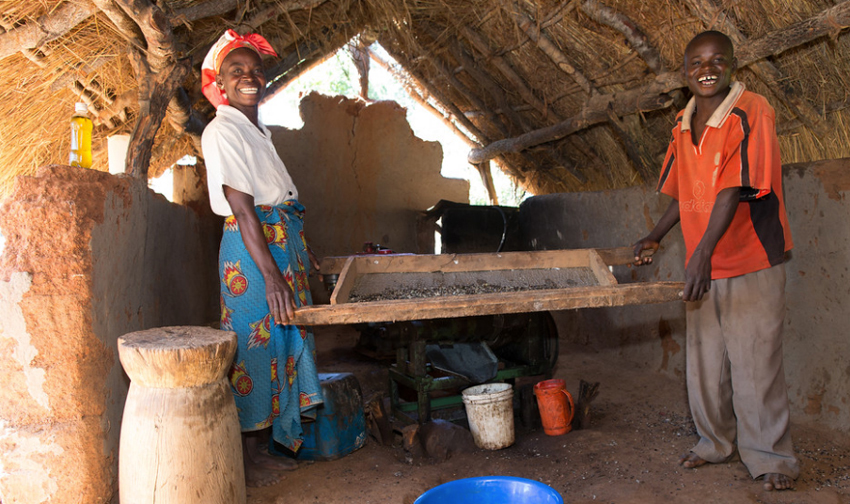 For members of the Chalimbana Sunflower Group in Eastern Zambia, the future is bright.

The 22 mainly women members from Lundazi District have not alone increased the production on their small plots, but have also more than doubled their earnings from sunflower production since they were organised into a producer group by Self Help Africa, three years ago.

The income boost is a direct result of the increase in production, alongside the purchase of a diesel-powered seed press that has enabled them to add value to their crop by processing their seed harvest into cooking oil that they bottle and sell in local markets.

A popular supplementary crop that has significant earning potential for rural poor farming households across the region, the members of Chalimbana Sunflower Group have adopted a range of crop management best practices, including early planting, weed management and crop spacing.

These, together with farmer access to better quality seed have all contributed to their increased yields. In a region where just 10% of sunflower growers access seed from formal channels, and most farmers either multiply their own seed or purchase low-grade seed from their neighbours, the potential for increased yields from better seed access is considerable.

Chalimbana Group members say that they are paid more than twice the amount for oil than they received previously when they sold raw seed to middle-men who in turn sold their crop on to processors.

With their increased income group members have bought bicycles, televisions and telephones, have carried out improvements to their homes, invested in livestock, and paid school fees for their children.