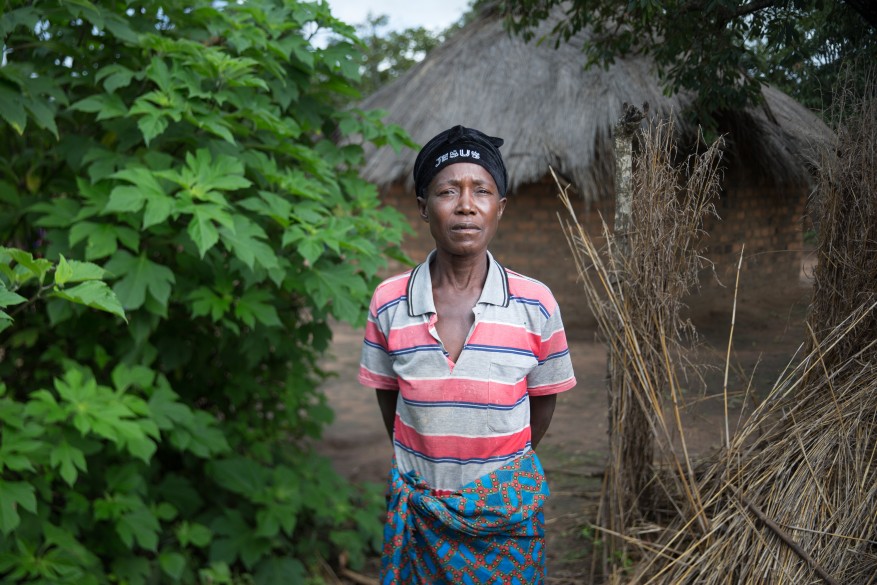 Looking back, Felister Namfukwe recalls that just a few years ago she led a completely different life.

A victim of domestic violence, she was married to a drunk and abusive husband who allowed her no say in family affairs, and no access to the money they would earn from their collective efforts on the farm.

“My husband would spend our money on beer, come back home drunk and beat me. I feared for my life,” she says.

Felister got out, and moved to nearby Nsunda village with her young family, to start a new life.

With support from Self Help Africa she began growing beans, maize, cassava and groundnuts on land that had been owned by her own father. She also joined a Self Help Africa backed scheme that is supporting villagers to rear improved breed goats.

She subsequently joined a village savings and credit group and started a small business, buying fish across the nearby border in Tanzania, and selling it locally. She also started making and selling maize fritters in the village.

[youtube https://www.youtube.com/watch?v=APZ5qvRFuIY&w=640&h=500]The new income that she earns from buying and selling goods will provide her with a safety net in times of hardship, she says.

Already, she has been required to call on these reserves, as heavy unseasonal rains destroyed much of her maize crop last year, and Felister needed to buy food to provide for her family.

Felister has a large household, and is currently providing a home for four of her own children, together with four grandchildren that she has been caring for since her own daughter divorced, a year ago.

There are a lot of mouths to feed, and it is tough for her to provide for all of them.

Recently, she invested in a new home, hiring a nephew to construct a new brick built dwelling to replace the mud home that she lived in previously. In time, she will replace her straw thatch with tin sheets, she predicts.

While the household living conditions have improved, Felister says that family health has benefitted too. She has been applying information that she learned on a nutrition training course in her preparation of family meals, and has also shared her knowledge with her daughter, who recently had her first child.

“Being part of this project has lightened my burden,” she said. “I live better now that I’m divorced. Life is easier, and I have more freedom than before.”