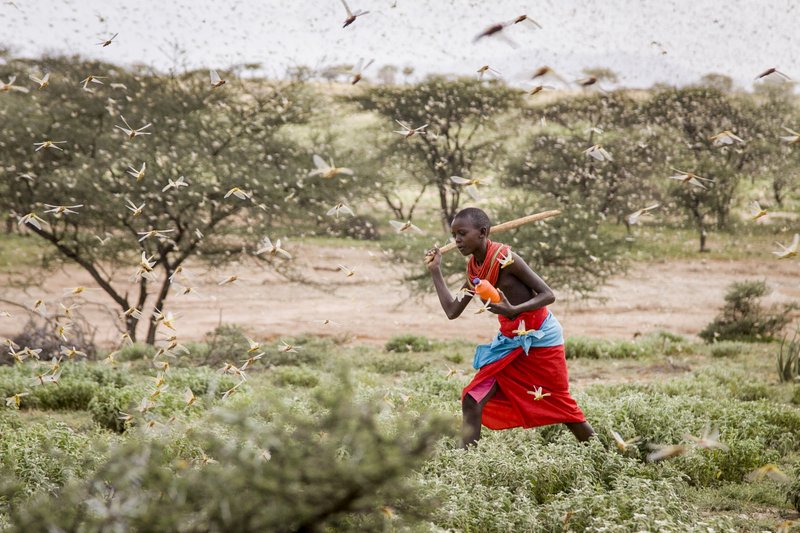 Generous donations from Self Help Africa supporters across the US have allowed us to respond to the devastating desert locust swarms now destroying crops across East Africa. The swarms – the worst in living memory and blamed on an unusually wet January – are now posing a significant threat to food production across Ethiopia, Kenya and Sudan.

A locust cloud of a square kilometre is capable of eating the same amount of food in a single day as 35,000 people, according to the United Nations. One swarm in Kenya has been measured at around 930 square miles – roughly the size of Rhode Island – and was estimated to contain up to 200 billion insects. There is mounting concern that the fast-breeding locusts could grow by up to 500 times in the coming weeks, as their eggs hatch in the rains that have arrived to the region in the past month.

Self Help Africa is responding to the crisis in both Kenya and Ethiopia. “We’re working with the affected farming communities in northern Kenya,” said SHA humanitarian coordinator Steve Langdon, “helping them to tackle the locust invasion through a combination of early identification and spraying.”

“Further north, in Ethiopia, the scale of the problem is even worse, with very significant damage to crops from these swarms,” he said. “We’ve decided to take a very simple but effective response to the problem there. We’ve identified 1,000 farm families in the southern Borana area who’ve been particularly hard hit by the locust attacks and we’re giving them a direct cash payment – averaging about $60 per family – to help them get back on their feet, buy new seed for the next harvest and help with food purchasing until then.”

[Photo above by Al Jazeera]