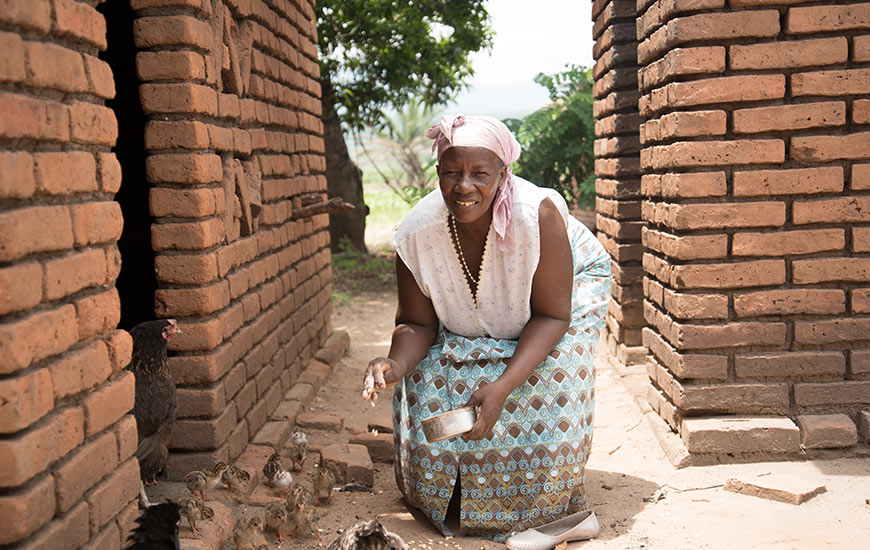 Queen cherishes her memories of her late father. She is sad that she hasn’t been able to share with him her recent successes and achievements.

Although her dad died over 20 years ago, Queen Masukwa says that she still thinks of him often. “I would like to be able to talk to him about what I am doing, about my family, and also about the work on our farm.”

Aged 60, and the proud grandmother of 19, she is a model farmer in Zingaranjara village in Northern Malawi. Supported by Self Help Africa under a project that supported households to diversify farm production, Queen and her husband Lisan now grow rice, groundnuts and cassava alongside their traditional maize crop, while she also breed pigs and poultry on the 1.5 hectare farm.

They had begun rearing goats on the property, but both the male and female were taken recently by intruders who came in the dead of night. “We heard a noise and went out to check, but the goats, which had been tied up in our compound, were gone.”

“It is a set back to have lost the animals, but because we have new crops we are doing okay. I am producing a surplus that I’m able to sell, and I have also sold my chicks and some livestock to improve my income,” she says. Queen Musukwa is chairwoman of a local women’s group. The members meet regularly, and save money that they then disburse as small loans, to encourage women to invest in small business, and in activities that might help them to earn an income on their farms.

Queen says that the farm training she has received has allowed her to rotate her crops, make compost manure for her fields, and to adopt new farming techniques. “I used to get just five 50kg bags of maize from this plot but I’m now harvesting 20 bags,” she says.

Self Help Africa worked with 13,000 households like that of Queen Musukwa in Northern Malawi, supporting families to diversify their farm production and adopt new farming methods that would help them to cope better with the effects of changing climate.