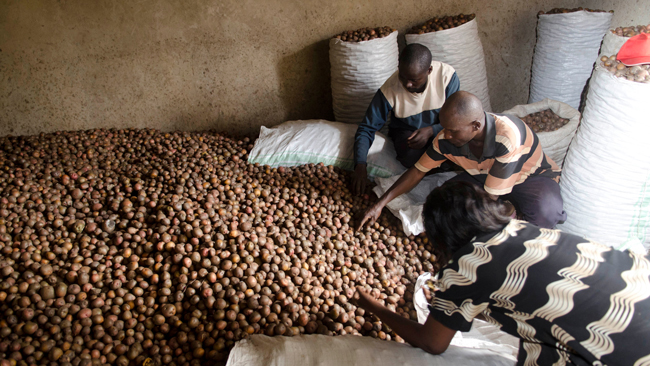 A problem shared became a problem halved for potato farmer Pelegia Anybembeire when she joined a farmers group in Nyambale, Uganda.

For the 46 year old is now seeing her produce command a good price, and being sold to markets as far away as the capital Kampala thanks to the negotiating power that the group has, as a result of their collaboration. 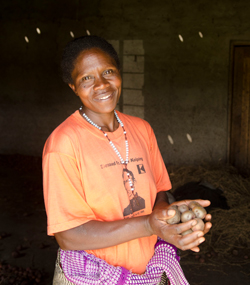 Pelegia says that previously she was at the mercy of passing traders who would offer her a ‘take it or leave it’ price for her crop. No longer.

Now, instead of sitting for hours each day at the dusty roadside waiting for passing traders that may never arrive, she instead transports her potatoes to a central store and benefits from collective marketing and bargaining.

Pelegia joined with her neighbours to form the Mukirwa-Kantora Potato Farmers’ Group two years ago. They share the staffing duty at a central store, and can now sell in bulk to traders who arrive in trucks. ‘Because we can offer the quantities required they travel from as far away as Kampala, and even from across the border in Rwanda,’ she says.

Previously, Pelegia and her fellow members used to earn just 1,000 shillings (30 cents) per bag for their potatoes. She struggled to survive and support her young family. Now however, they receive up to 70,000 shillings (€20) per bag.

“Recently, I bought a cow with my increased income”, she said. This Ugandan farmers group received training from Self Help Africa, technical support with potato handling, and has been provided with the means to access market prices for their produce.