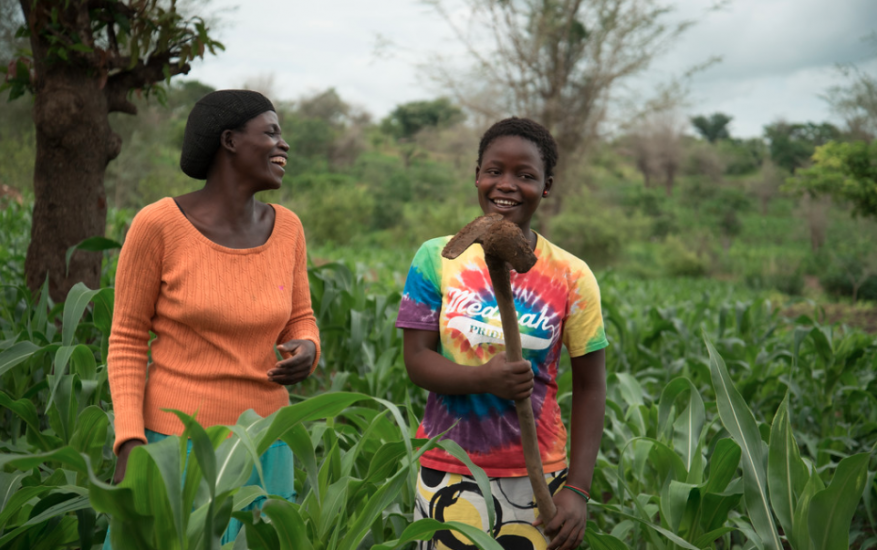 The mud bricks that she has made are stockpiled beneath the tree that shades her home in Mabanda village in southern Malawi.

“When I have enough bricks, we will start to build a house for my daughter,” says 32-year-old mother of two, Patricia Twibe. Her daughter, Sofiat, is 16 – the same age Patricia was when she became a mother.

Sofiat isn’t sure that she wants to stay in Mabanda. A grade five student, she walks three hours each day to school with her nine-year old brother, Atopere. “I want to finish school and then I will decide what to do,” she says.

Patricia Twibe grows maize, sorghum and cowpeas on a two-acre farm she inherited from her mother, and supplements her income with a business buying dried fish that she sells to villagers.
[youtube https://www.youtube.com/watch?v=uw2M7y4Bsjk]

With support from Self Help Africa she has also started producing nutrition-rich sweet potato, which helps her to produce a year-round supply of food for the household. Patricia is amongst 32 local women who are members of a village savings and loans group in Mabanda, who receive assistance and business advice.

After saving for over six months she took her first loan from the group and bought two kid goats, which she is rearing. “I plan to breed them when they are old enough, and then I will sell the young to earn more money.”

Patricia has given her children a small corner of land where they grow their own stands of maize. “Although they both help me with my farm work, it is good for them to also learn for themselves how to farm,” she says.

Sofiat enjoys having her own piece of land, and says that although she has thought about finding a job in town when she is finished school, she thinks that her future will probably be as a farmer.

“I have friends at school, but my close friends are here in the village. There are four of us who grew up together. We have known each other since we were babies,” she says. “Last week, we took the bus together to town and got our ears pierced,” she says, displaying two bright red studs that she has been wearing since then.

Patricia recognises that her daughter is growing up fast. “Not so long ago she was a little girl. Now look at her,” she says.