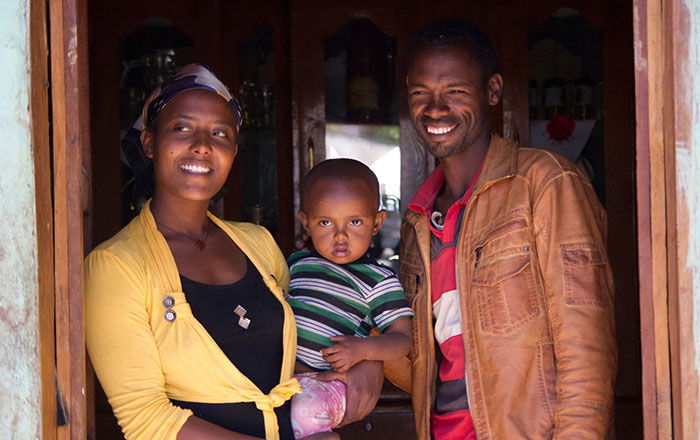 The UN has declared 2014 to be the ‘international year of family farming’. Here at Self Help Africa, every year is all about working with smallholder and family farms. However the formal recognition and backing from the UN will help to refocus the minds of policy makers on the key role family farms play in the world economy.

The UN says the ‘aim is to raise the profile of family farming, on its key role in eradicating hunger and poverty, providing food security and nutrition, improving livelihoods, managing natural resources, protecting the environment, and achieving sustainable development, in particular in rural areas.’

Over the course of 30 years, Self Help Africa has worked with more than 2 million smallholder farmers and, in the process, helped to improve the lives of an estimated 10 million beneficiaries. Our work is as vital today as it has ever been which is why we are supporting 28 year old Teferi Zenebe, his 25 year old wife Tsige Bekele and their 16 month old son, Mariamant Teferi. This young Ethiopian family , who live near the town of Hurata , are members of a local savings and credit union. Using a loan to buy improved seed and fertiliser, Teferi has more than doubled his output of tomatoes from 240 boxes a year to 600. He’s been equally successful with his wheat production, which has jumped from 2.4 metric tonnes per hectare to a highly impressive 6 tonnes currently.

With the extra income, the family have been able to build a new house, buy a cow ( which has produced a calf) and have ambitious plans for future growth.

Their inspiring story is but one more reason to get behind the UN’s Year of International Family Farming.