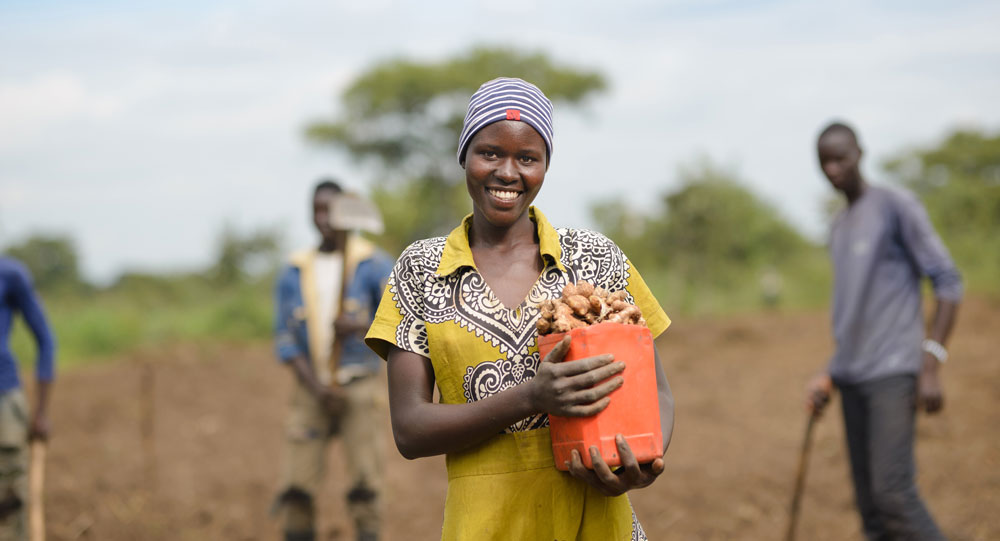 The Atiira Youth Group in Kapelebyong District of north-eastern Uganda have staked their future on ginger. It’s a bet that’s already starting to pay off

The 25-strong group is amongst nine producer groups with a total of 225 members who are now growing ginger as a cash crop to supplement the incomes they earn from on their small farms.

Each group is devoting an acre of land to ginger production. With support from Self Help Africa they’ve secured a contract for their yield to ginger processor ‘Greening Uganda,’ who will pay the farmers €0.80 to €1.40 per kilo, depending on market price and quality. Greening Uganda have also provided each group – made up of local women farmers or of rural young people - with specialized technical support with land preparation, crop management, harvesting and packaging of ginger.

Ginger isn’t commonly grown in the north-east, but market analysis carried out by Self Help Africa and the regional government’s Agricultural Production Department confirmed its potential. Ginger rhizomes (root stock) were acquired and distributed to the farmer groups.

Norah Alupo is a member of a ginger production group in Otapengo village. A 32-year old separated mother of six, Norah says that as a single parent she has to work hard to provide for her kids and keep food on the table.

“As a member of this group I am finding it easier. I joined a savings programme as a part of this enterprise, and have already managed to save €32 from the sale of small livestock and other produce.”

Norah is optimistic that ginger will help her further, with her group estimating that they can earn almost €4,800 once they sell their crop in the near future. “We’ve arranged to sell 70% of the crop, and will use the remainder as planting stock for next year,” Norah says.

Each of the group members will earn between €150 and €220 from their harvest. “This income will make a huge difference for me, and for my family,” she adds.

Uganda produces more than 170 metric tonnes of ginger a year and exports to regional and international markets, including to the United Kingdom and Germany.