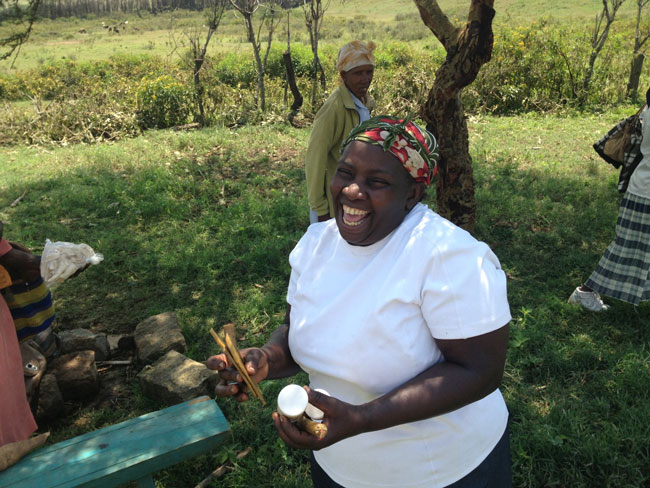 Supporting and feeding a family in Kenya’s Rift Valley is difficult for many – producing the food required to feed a community of orphans greatly increases the challenge.

But that is what the Imani New Step group in Kamathata village near Nakuru are doing, and their task has been made far easier as a result of the agricultural support provided by Self Help Africa.

Group member Franciscah (pictured above) explains that Imani New Step was established in Kamathatha some years ago to provide community care for a growing number of young people who had been orphaned by HIV/AIDS and other illness. They did this because a desperate need existed, and although food was already scarce for many households. “Many of us used to endure up to six months of the year without enough food. Usually it was the women who missed out on meals,” she recalls.

Participation in a Self Help Africa project enabled New Step members to begin breeding goats. By cross-breeding local livestock with improved breed male goats they successfully established a herd that produced larger and more productive animals. “We sometimes have as many as 160 orphans in our care, so the increased milk, meat and cheese has been a big help,” Franciscah said.

Imani New Step’s members have also participated in training courses in sustainable agriculture and soil conservation, and are using their new skills grow more food to support their own families and help with their orphan care programme. Other households in the community have watched the project develop too, and are seeking to collaborate with Self Help Africa and implement similar improvements on their small farms.

Sponsor a goat for an African family and support Self Help Africa’s work. Click here.