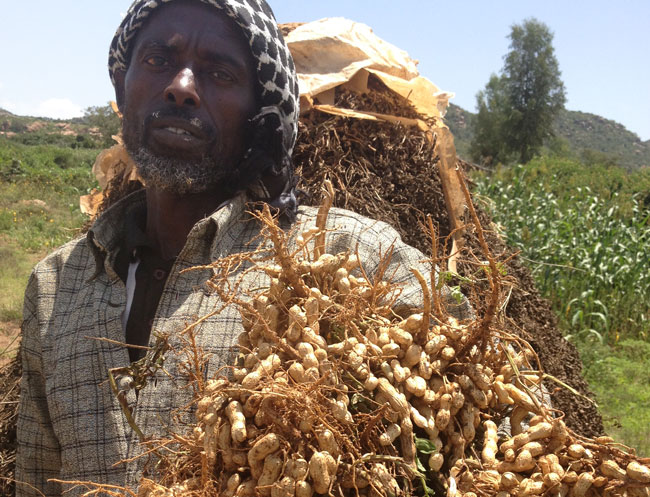 An enterprising peanut project is transforming the lives of close to 800 Ethiopian farm families, with producers earning a premium by trading not just their raw nut crop, but also processing and selling peanut butter to supermarkets in the region.

Just eighteen months after 770 farmers in districts of the East Haraghe region of Oromia province were enrolled and trained by Self Help Africa to participate in the pilot groundnut (peanut) project, they are seeing three and four-fold increases in their harvests of improved nut varieties.

A combination of improved seed varieties and better farming practices has seen yields grow from an average of 13 quintals (one quintal equals 100kg) of unshelled nut per hectare up to 50 quintals per ha.  Half of the farmers involved in the project are women.

The groundnut producers, who are members of six local farmer cooperatives are adding value to their crop too, with the growers having invested in a groundnut shelling machine that has given them the capacity to shell up to 250kg of nut per hour, compared to just 6-7kg of nut which was previously possible by hand.

Through their ‘parent’ Afrankalo Cooperative Union the peanut producers of East Guraghe have received training and marketing skills too, and recently started processing their shelled nuts into peanut butter.  Their processed butter trades at a premum, and members recently established a market for the product at local supermarkets and from other buyers.

The innovative groundnut project in Oromia has received backing in the past year from the staff fund of Ireland’s electricity board, Electric Aid.