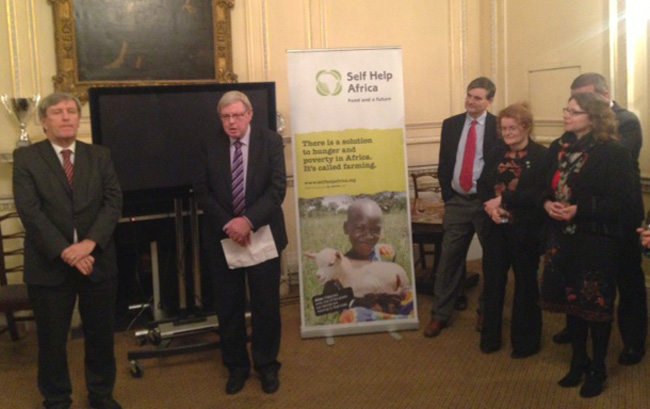 On Monday night (march 24th), the Irish Ambassador to London, Dan Mulhall, held a reception to mark 30 years of Self Help Africa.

Before an invited audience of senior politicians, business leaders and young entrepreneurs, Mr Mulhall spoke of the close working relationship between Irish Aid and Self Help Africa.

He paid tribute to the quality of the work being delivered, on behalf of the Irish government, by Self Help Africa in Zambia, Ethiopia, Kenya, Uganda and Malawi. In reply, Self Help Africa’s Chairman, Tom Corcoran said it was very fitting that, as a British Irish charity, the ambassador had been able to speak in front of supporters from Britain and Ireland.

Mr Corcoran noted that while the nature of the challenges facing development work in the 21st century were different than those in the mid 80s, the organization had always remained true to the ethos of the founding fathers. The work starts and finishes with improving the long term livelihoods of smallholder farmers by ensuring they get the best possible returns for their output.