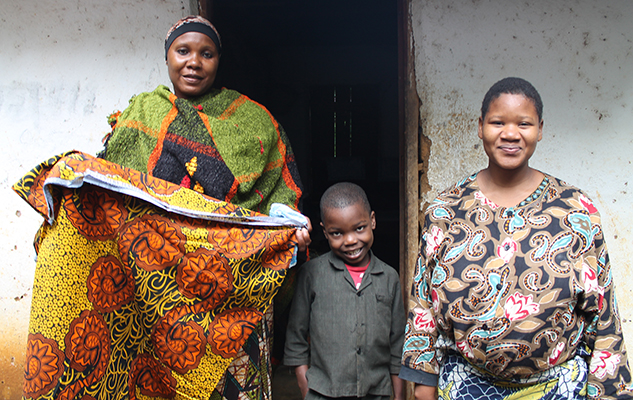 Today, however the 43-year-old happily declares, ‘food is no longer a problem’.

Not only does she now grow enough to put food on the table, she has also started a small business women’s clothing.

This change in fortunes was triggered when Jestina, who lives in an isolated rural community hours from a bank, was provided with access to a loan for the very first time.

As part of a Self Help Africa savings and loans project, she was able to borrow the modest amount of 200,000 Tanzanian shillings, just £65, which she invested in better seed and fertiliser.

These improved inputs brought better harvests. Soon Jestina was collecting seven bags of maize an acre instead of just two, enough for her to feed her family and sell for profit.

With the profit from her maize, Jestina invested in reams of colorful material at market, tailored it at home and began reselling it as kitenge, a sarong-like garment popular across Tanzania.

With both her farm and her kitenge business making a profit, Jestina now has a new found financial stability. One that she hopes will mean her youngest son, seven-year-old Paul, will be able to stay in school until graduation.

Jestina’s success demonstrates the potential that millions of hardworking but isolated rural farmers across sub-Saharan Africa represent, if only they are provided with access to resources such as credit or training.

Kitenges are often decorated with popular mottos in the local language Swahili. One such slogan seems appropriate for Jestina’s hopes: