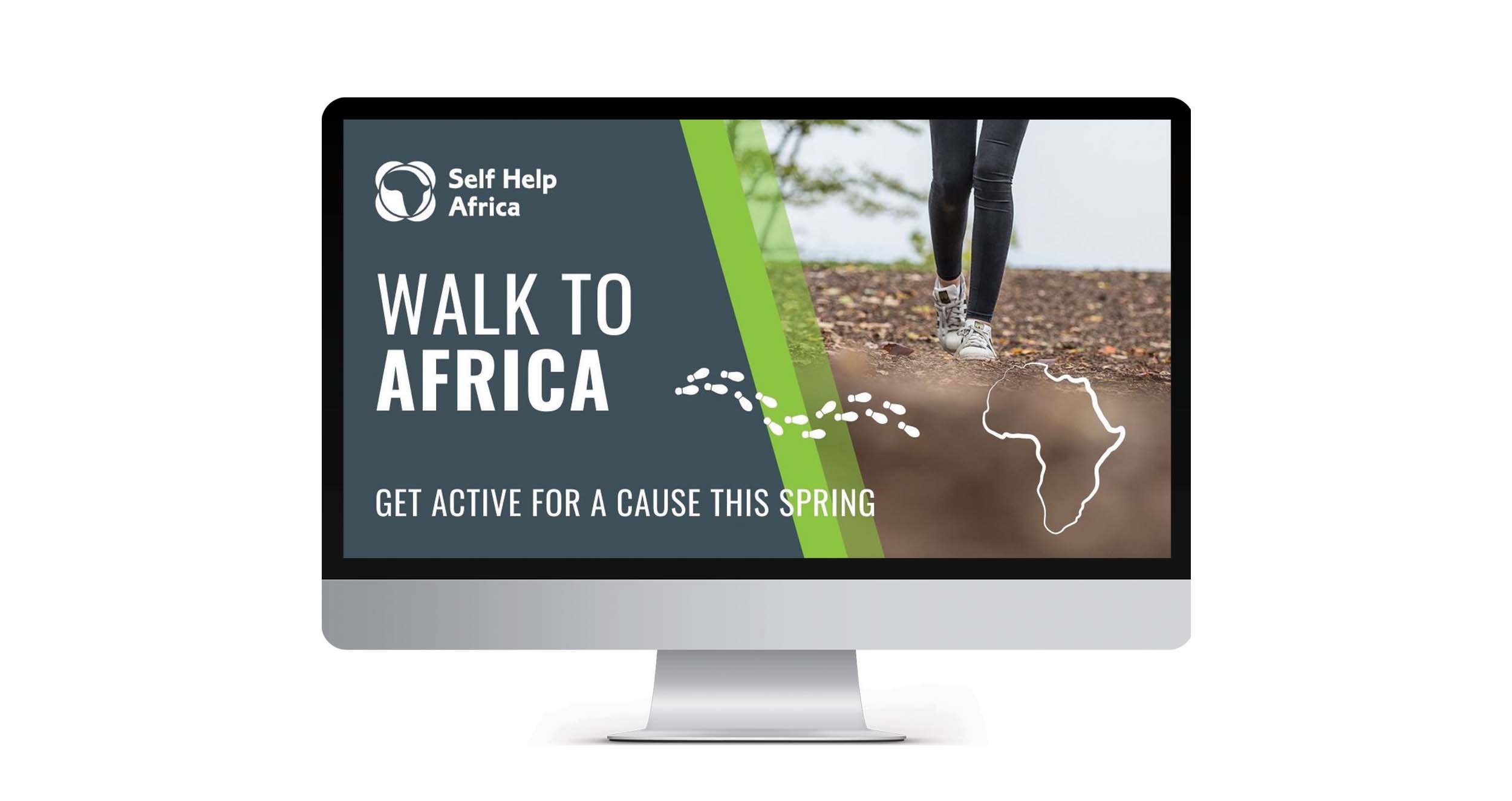 We’ll forever look back on 2020 as the year of masks, elbow bumps, hand sanitiser, social distancing and Zoom socials. The pandemic led to lockdowns all over the world, and as a result, virtually all of Self Help Africa’s events and engagements for 2020 were either cancelled or moved online.

Our commitment to engaging with the wider public to highlight the issues, challenges and responses to global poverty remained a vital aspect of our work. We developed new digital resources, including two online exhibitions Women on the Frontline of Climate Change and Levelling the Field.

Our hugely successful One Million Trees campaign was a highlight of 2020, featuring on millions of Glenisk yogurt pots and milk cartons and capturing the public’s imagination.

Launched in February 2020, One Million Trees set out to plant a million trees in Africa, as well as 100,000 native trees in Ireland and the UK. Thousands of people donated, and corporate backers also lent their support.

Trees were planted by SHA and local partners in projects from Uganda and Kenya, to Burkina Faso and Ethiopia – with the ceremonial one millionth tree planted by children and parents in Lake Ziway, in Ethiopia’s Great Rift Valley, in spring 2021. Meanwhile,  environmental NGO Trees on the Land help plant native trees in Ireland.

Campaign donors – who were invited to plant 10 trees in Africa and 1 native Irish tree for just €5, received reports and GPS coordinates of where their trees had been planted.

In March 2021, a new collaboration, Another One Million Trees, was launched with Glenisk, with the same campaign goals and an added dimension of carbon footprint offsetting for Irish businesses.

With fundraising events all moving to the online space in 2020, Facebook groups were created to host a series of activities and to foster a sense of community for Self Help Africa supporters.

These included a Secret Supper Club group with 500 members, and a Trees Challenge group with 200 supporters in Ireland and the UK, taking part in various fitness challenges. A virtual gala event in the US was enjoyed by more than 250 supporters.

We took part in an online agri-showcase alternative to our traditional in-person attendance at the National Ploughing Championships in Ireland. More than 350 friends and supporters of Self Help Africa responded to a public engagement survey that was circulated.

We grew our social media supporter base to more than 85,000 people, and join the TikTok community for the first time.

The Irish Aid-backed schools programme, run by a Self Help Africa-led consortium, also reached the highest number of new post-primaries, despite COVID-19 disruptions.

In the eight years since the establishment of WWGS, the programme has reached 70% of all secondary schools in Ireland – delivering grant funding for GCE activities, awarding Global Passports in recognition of outstanding achievements by teachers and students, and organising professional development opportunities for teachers. WWGS continues to seek to influence the integration of GCE beyond the post-primary curriculum too, by increasing engagement and collaboration with a range of strategic stakeholders in the formal and development education sectors.

More than 100 principals and deputy principals attended the fourth annual WWGS Symposium, attended by Minister of State for Overseas Development and the Diaspora, Colm Brophy. The event focused on GCE, School Culture and Ethos, with the aim to encourage post-primaries to engage with GCE at management level, and to increase awareness and understanding amongst principals and deputies of the programme’s value and relevance within the school curriculum. WWGS also continued to engage with the consultation process around curriculum reform, including a submission to the draft Primary Curriculum Framework, and as part of a joint submission with the IDEA Formal Education Working Group.

The COVID-19 pandemic pushed content, conversation and classrooms online, as Self Help Africa’s Development Education programme engaged with students, teachers and community groups virtually for most of 2020. New online workshops, interactive classes and exhibitions were developed, and provided an opportunity to reach new schools and audiences, with Zoom a quick, cost-effective and time-efficient way to engage.

In the autumn, 60 second-levels took part in new online hosted schools workshops, many involving multiple workshop sessions with each school group. The Self Help Africa team also participated in several school network learning events, and delivered educational workshops and learning modules in third level and community settings, as well as with young people participating in the Youthreach early school-leavers programme.

Self Help Africa’s long-standing collaboration with Irish Aid on the BT Science for Development Award was the first and only in-person programme in 2020. Agricultural and environmental scientists working with SHA augmented our presence at the annual BTYSTE Exhibition, which attracted hundreds of visitors in January. The subsequent Science for Development Showcase was hosted online by Minister of State for Overseas Development and the Diaspora, Colm Brophy, with students and teachers from schools around Ireland attending.

Self Help Africa is a signatory to the United Nations Global Compact, a UN pact that encourages businesses, labour groups, UN agencies and civil society to support the objectives of the Sustainable Development Goals (SDGs).

The UN Global Compact is the world’s largest corporate social responsibility initiative – with over 13,000 participants over 170 countries. The Compact provides an ethical framework for businesses, and specifies principles that signatories should support, in the areas of human rights, labour, the environment and anti-corruption.

As signatures, Self Help Africa and subsidiaries are required to submit examples of compliance, including information relating to organisational safeguarding and other policies, examples of programme activities that show how the objectives of the SDGs are being pursued, and examples of where codes of good practices and professional conduct relating to the principles, are being rolled out.

On this website we use first or third-party tools that store small files (<i>cookie</i>) on your device. Cookies are normally used to allow the site to run properly (<i>technical cookies</i>), to generate navigation usage reports (<i>statistics cookies</i>) and to suitable advertise our services/products (<i>profiling cookies</i>). We can directly use technical cookies, but <u>you have the right to choose whether or not to enable statistical and profiling cookies</u>. <b>Enabling these cookies, you help us to offer you a better experience</b>.