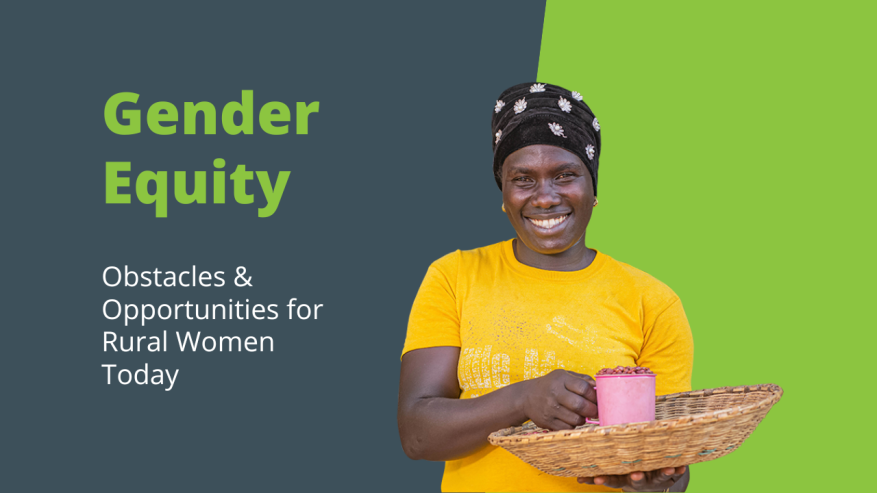 Rural women have the drive, vision and ability to improve their lives and those of their communities – they just need equal access to resources and information.

This was one of the key messages from a panel of African women in our recent webinar to mark International Day of Rural Women.

In Africa, 80% of agricultural production comes from smallholder farmers who are mostly rural women. They don’t have equal access to land or resources. Similarly, female-led businesses comprise up to 40% of small- and medium-sized enterprises (SMEs) in Africa but only 2%  of large corporations’ procurement is from women-led companies.

Overcoming these kinds of gender inequalities can have a powerful economic and social impact not only for rural women but for their families and communities, so it’s crucial that women have the resources and agency to make positive decisions about their lives.

This week, in an online discussion hosted by Self Help Africa, Esther Ainyo, regional programme manager for Self Help Africa in Uganda; Jane Maina, the managing director of Vert Ltd in Kenya; Veneless Chimpesa, a gender and nutrition advisor in Malawi; and Isatou Ceesay, who founded Women’s Initiative Gambia, shared their experiences of being a rural woman or supporting rural women in Africa.

Here are five takeaways from their discussion…

“I have seen tremendous changes. The women are very powerful. They only need to be tickled a bit to move on. They are always committed. We have seen a 61-year-old woman construct a house just because she was supported by Self Help Africa. We have seen elderly women get out of their comfort zones of begging to do things for themselves. We have seen young mothers getting empowered to speak for other mothers in the same situation. When you target the rural woman, you target the entire community. Whatever they do spills over.”

“It’s very important to involve community leaders in the issues of gender,” said Veneless Chimpesa. “This has shown an increase in the adoption of best practices at household level. If you’re involving influential leaders, these are the people who others listen to and have better respect – whether they are men or women. They are able to influence positive change. Farmer field schools also offer an excellent opportunity to move away from traditional role models and household dynamics. They enhance women’s empowerment, self confidence, and the reimagining of their own role in agricultural activities.”

“You cannot work in isolation,” said Jane Maina. “It’s important to work with actors across the value chain. It’s important the messaging we have is harmonised and consistent. We try to align our approaches to their [government] proposals and there is a lot of benefit in doing so because all the actors who seek partnerships with the farmers do so with the expectation of sustainability. If their approaches are different to the regulators and the government’s, then it becomes difficult to make headway.”

Esther Ainyo added: “We have always used the local councils as our entry point in the advocacy work we do. We don’t reinvent the wheel but work within established constitutions. We work with the lower councils from village to sub county and national levels. But the issue of land in Uganda generally is complicated. During advocacy and community dialogue meetings attended by local chiefs and area councillors, we discuss things with them and try to draw a picture – ‘put yourselves in the shoes of the women who you are denying rights to land’. It’s a process and it will take time. There are a few [instances] where heads of households are beginning to soften. It’s a process that’s started and we hope to continue until change is realised.”

“Working with women helps build their confidence,” said Isatou Ceesay. “They know they can make a change. It gives them a voice in their community and households. We know malnutrition among children and pregnant women is a problem, for example. We understand it’s due to food they are eating and taboos about what can be eaten during pregnancy. So, we worked with an organisation to educate women about growing vegetables in their home gardens. Now their weight is improving and nutritional intake within the community is better. If we come together we can make a big change.”

“We go that extra mile to invite both rural women and men to training sessions so they can share and agree and discuss and visualise where they want to be as a household and family in the near and far future,” said Esther Ainyo. “It works. We’ve seen it work”

Veneless Chimpesa added: “We train community-based facilitators, including male and female lead farmers, to be gender champions in farmer field schools. We also use comic books to help facilitate conversations and raise awareness about gender-based violence. We use the comic book in farmer field school meetings or during meetings for farmers to ask them what they see in the pictures, how can we best promote best practice and joint decision making.”

You can watch the full session here.