BETTER FARMING AND DIETS IN MALAWI

The report also found that the decision-making power of women involved in the project had increased by 140%, while there was a 113% increase in the number of women saying that they were more financially independent than in the past.

Funded by the European Union, BETTER operates in ten districts across Malawi and uses a Farmer Field School (FFS) approach to training farming households to improve food, nutrition and income security and resilience.

Started in 2018 and running until 2022, BETTER aims to reach a total of 402,000 smallholder families. The review found that 56% of the targets had been achieved by the mid-point of the project, 78% of the planned Farmer Field Schools were functioning, and 73% of farmers were participating in small-scale income generating activities at that point. 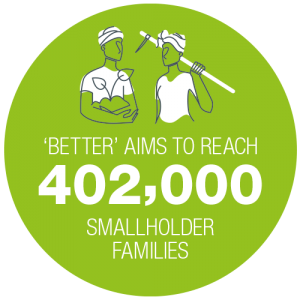 Most farmers demonstrated a good understanding of technologies they learned from FFSs, including the adoption of improved agriculture practices such as agro-forestry, inter-cropping, pest and disease management, soil and water conservation. Women farmers trailed men however in adopting certain climate smart technologies, in many instances because the approaches were regarded as more labour intensive, and thus harder to adopt.

The review found however that the FFSs, using master trainers and community-based facilitators, reached people more efficiently than the traditional training model, which required an extension worker to visit every farming family.

Local trainers and organised demonstrations and field days ensured that farmers learned and adopted new technologies easily. The FFS model had improved agricultural extension services in Malawi that had been at the point of collapse, the report concluded.

A mid-term review of the project, which works with 20,000 households in western Kenya, found it had surpassed its target of 60% women reaching above the minimum standard of living. In the same period there was also an increase in women cassava farmers saying they now had a bigger voice in decision making. READ MORE...

The study carried out in 2020 also found that 77% of farmers involved in the project had taken part in training programmes, while 63% said that the management and governance of their producer groups had improved.

For a long time, cassava has been considered a ‘poor man’s crop’. This project works to change that - promoting cassava as an important part of smallholder farm production, and one that can be used for both household food consumption and as livestock feed. Women farmers are provided with new opportunities to farm the drought-tolerant crop, which can also be kept in reserve to harvest when food is scarce.

Nearly 80% of households involved in producing cassava noted that access to cassava cuttings for planting had improved, while close to 20% said that they were benefitting from higher yields.

The project mid-term review acknowledged too, the challenges with cassava farming - it is a labour-intensive crop to grow, vulnerable to post-harvest losses, and is a relatively low-value food crop.

Strengthening the Competitiveness of the Cassava Value Chain in Kenya is a five-year programme funded by the European Union, being jointly implemented by Self Help Africa and a number of national partner organisations.

A Brighter future
for refugees

0%
of respondents said that their living conditions had improved

a brighter future for Refugees

Every year, tens of millions of people are displaced by poverty, flooding, drought and conflict. These people are amongst the poorest and most marginalised – living life in limbo - often with little prospect of ever being able to return home. READ MORE..

Two recent Self Help Africa pilot projects sought to pave a way to a more self-reliant future for refugees. In both instances, agriculture was used as the driver to help refugee families on a path to a brighter, independent future.

A recently published assessment of Zambia’s Graduation Project, with refugees in the country's north-west, it was found that there had been a significant uptake of new farming practices and engagement in livestock rearing by households. The project had also encouraged a number of graduates to set up small trading businesses, selling groceries, meat, fabric and fruit in the two camps.

94% of target families had at least two income sources, a savings culture amongst camp residents had emerged, while 89% of respondents said that their living conditions had improved.

At Adjumani, Uganda, Self Help Africa worked with the World Food Programme (WFP) on a pilot 3.5 year project that ultimately saw refugee families selling produce back to the WFP as part of their procurement of food supplies for Uganda’s 1.3 million refugees in their care.

Refugee households with access to land, together with local farmers, were supported to grow crops including maize, beans and sorghum, as well as iron-rich beans and orange fleshed sweet potato.

98% of the 300 participants who responded to a project survey said that they were more food secure, while 89% said that they had access to more nutritious foods.

Africa is home to nearly 30% of the world's refugees. Projects in Zambia and Uganda have supported refugee families to become more self-sufficient.

Thousands of smallholder farmers in Ethiopia have been supported with improved access to markets for their crop, as part of a Self Help Africa programme working to develop the maize value chain.

Every year, tens of millions of people are displaced by poverty, flooding, drought and conflict. These people are amongst the poorest and most marginalised – living life in limbo - often with little prospect of ever being able to return home. READ MORE..

Feed the Future Ethiopia Value Chain Activity was an 18 month project that concluded in July 2020, and was implemented by SHA under FINTRAC’s contract with the US Agency for International Development (USAID).

The goals of Feed the Future were to improve the maize value chain as follows:

By the end of the project, through the cooperative – average sales of maize increased by 36.17% - exceeding the project goal of 20%. Across the two primary cooperatives and their respective unions, a total of 26 partnerships were created.

The participation of women was another important measure of success for Feed the Future, with numbers in the Bore Bako and Gibe Dedessa cooperatives low at the start – just 11.7% of members were women. In the 18 month life cycle of the project, this had increased to 22.4%.

Despite ongoing efforts, post-harvest losses remain a big challenge in Ethiopia. A survey conducted in three major grain producing areas of the country – Hetosa, Ada and Bako – showed that more than 93% of farmers are using traditional grain storage containers, exposing stored grains to be attacked by pests. As part of the Feed the Future interventions, SHA worked to address this, by providing post-harvest management training to farmers. Already, there has been some improvement here, with only 55% still using a traditional storage structure.

In the areas of food security and diversity, and nutrition, the post-programme survey showed impressive results, with almost 95% of households reporting that they were food secure.

The Feed the Future project demonstrated that by working together, and unlocking the potential of farmer groups and cooperatives, a-maize-ing results can be achieved.

Self Help Africa is committed to supporting a green economy approach for low carbon, resource-efficient, and socially inclusive growth. To achieve this objective, SHA manages two Challenge Funds in Zambia and Kenya.

Learn more about our challenge funds

From Farm to Market

Self Help Africa is committed to supporting Africa’s smallholder farming families to increase the quantity and the quality of food that they produce on their small farms. In a region with an estimated 33 million farms of average size of just two acres, we support small-scale farmers to increase their yields and diversify what they grow.

Africa’s agricultural transformation needs much more than that, however. A multi-track approach must support the creation of profitable markets and removes obstacles to trade. This will enable Africa’s small-scale farmers to earn more from their work and is vital if agriculture is to be a driver of economic growth and a key instrument to end extreme poverty.

Self Help Africa and our social enterprise subsidiaries – TruTrade and Partner Africa - are focused on developing opportunities and breaking down the barriers to progress faced by millions of farming families.